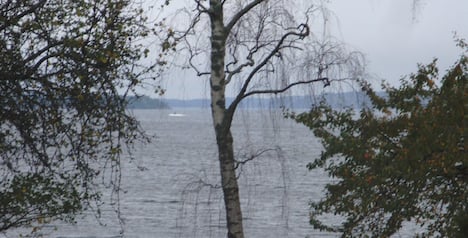 In a press conference on Sunday evening, Rear Admiral Anders Grenstad, said it was likely that a foreign power was undertaking “underwater activities” around the islands off the coast of Sweden’s capital city.

The Armed Forces also released a photo of a suspicious object taken on Sunday morning. Grenstad said the photographer had “seen something on the surface, and after he took the picture it sunk down again.”

But Grenstad said they had not established that the suspicious object or objects were submarines. Numerous newspaper reports have said that a damaged Russian submarine was the cause of the alert.

"The information that the Armed Forces has does not allow us to draw the conclusion that it is a damaged Russian submarine," he said.

Grenstad said the purpose of Sweden’s current operations was to verify if there is indeed foreign activity in the Baltic Sea off Stockholm. He refused to say whether Russia had been identified as the likely culprit.

He said that three separate sightings had been reported in stretches of water near Stockholm – Kanholmfjärden, Nämdöfjärden and Jungfrufjärden – and that these occurred on Friday and on Sunday.

”The only nation with a motive is the one that doesn’t want us to continue developing our cooperation with Nato,” he told TT.

Asked what the Swedish military was hunting for in the waters off Stockholm, Allerman said:

”They’re searching either for divers or diving vessels … small submarines or possibly a conventional submarine in the 60 to 70-metre class. The latter is less likely.”

A large number of Swedish military vessels are continuing to search the archipelago.

In other developments today, Swedish media reported that a Russian research vessel equipped for underwater search operations was heading for Swedish waters. The ship, the Professor Logachev, has a stated destination of Las Palmas, but is currently in the Baltic to the south-west of Hangö in Finland.

The presence of Russian-owned, Liberian-flagged oil tanker NS Concord has also been remarked on in the Swedish media as possibly having a connection to the incident. The tanker was initially heading to Denmark, but has been criss-crossing the seas off Sweden.

But Anders Nordin at the Swedish Coastguard told news agency TT that the NS Concord’s movements were consistent with normal tanker movements.