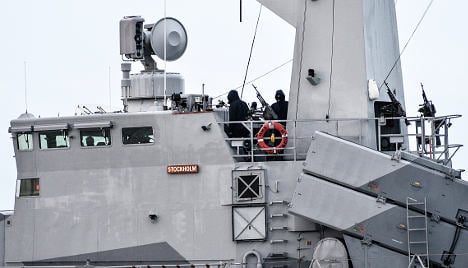 More than 200 Swedish troops are scouring the waters outside the capital in response to “credible reports” of foreign underwater activity.

A distress call made last week suggests Swedish forces are looking for a damaged Russian submarine, newspaper Svenska Dagbladet reported. The military said it would not “confirm or deny” the identity of the alleged intruders.

So why are foreign forces lurking just 50 kilometres from central Stockholm? Johan Wiktorin said there were three likely reasons.

“They could be mapping the waters in order to be able to navigate them in the event of hostilities.

Full timeline of the hunt

“They could also be installing equipment, like sensors, that could track or get an observation of our units in that area.

“Or they could also possibly reconnoiter our defence systems, if we have any in that area.”

Swedish military vessels patrolling the area are probably looking for “a small submarine or a midget submarine or some kind of underwater, torpedo-like vehicle,” said Wiktorin.

The Swedish military revealed on Sunday that it had been monitoring activity in the area of the sightings over a period of several years.

“I was a little bit surprised hearing that at the press conference. That in itself increases the probability that there is something going on.”

Major defence cutbacks in recent years have left Sweden without specialized anti-submarine helicopters. Despite this, Johan Wiktorin thinks the military has enough resources to cope with the ongoing operation, “but with limitations of two kinds”.

“One is quality: that is, the lack of qualified anti-submarine helicopters, which are needed to surprise the submerged vessel with their sonars.

“Then, in quantity, we have fewer surface vessels and submarines than we used to have 25 years ago. That reduces our endurance in operations, and the possibility to carry out large parallel operations in other areas.”

On the plus side for Sweden, “the sensor systems on our warships and submarines have developed quite significantly” in the last quarter century.

With a large-scale counter-intelligence operation underway, how can a foreign craft avoid detection?

“The most important thing to recognize is that they have to have a whole system in operation.

“Besides the submerged vessels themselves, they need a rescue organization both on land and at sea in the vicinity, and they have to have all their intelligence systems operating in order to find out what the Swedish armed forces are planning to do and then to communicate that to that submarine.”

Swedish signals intelligence services should then be able to detect some communications, but a damaged craft can listen passively without emitting signals of its own, making it difficult to locate, said Wiktorin.

He expected the operation to carry on at least until the weekend.

“But this can evolve in any direction.

“Suppose you have contact again with a technical system that replicates something, then you can narrow down the search. But it all depends on the quality of the units involved on both sides.

Wiktorin said he was not worried in the short term about the consequences of a foreign incursion into Swedish territorial waters.

“But I think perhaps there is a collective assessment that has to be made in the Baltic Sea area. We can also see that the Russians keep going with their rearmament, and it’s a very steep curve.

“Despite the economic sanctions, they have chosen in their budget now to decrease the health and education budget in order to keep up the military budget.

“We can see the tensions developing in the area and see that we have to take precautionary measures to get up the capability of the armed forces.”

While Sweden is likely to increase defence spending slightly in the immediate aftermath of the Stockholm mission, Wiktorin said “significant action” would be needed to prompt serious reinvestment in the military.