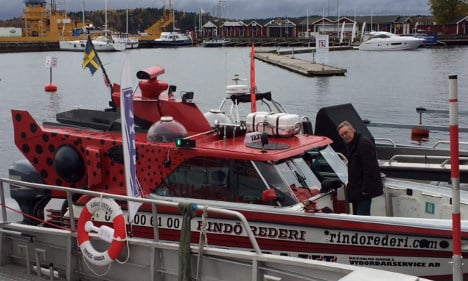 Vaxholm has a long military history, immediately made obvious by the huge fortress that towers over the town, in contrast to the pastel coloured wooden buildings dotted around the harbour.

The town remained a military base until 2006, with artillery batteries and bunkers in place to protect locals against any invading forces.

Now Swedish military vessels are back patrolling the seas around Stockholm's archipelago. Many older residents say they are reminded of the Cold War.

“Things like this have happened before but I am not so scared,” says Bosse Linden, 54, a water taxi driver who also served in the Swedish navy for 25 years.

"I think there is something out there, but the archipelago is really big”.
He believes that another country could be “playing a game of hide and seek” or simply making use of the broad stretch of “special water” which he describes as a dream location for people who want to learn how to drive boats or navigate submarines.
“If you learn how to navigate a submarine here then you will be the best,” he tells The Local.
“I don’t think it is a war mission. I don’t think someone is going to take over. But some people are scared” he adds.

Vaxholm is often described as the capital of Stockholm's archipelago. Photo: Maddy Savage

About an hour by bus or boat from Stockholm city centre, Vaxholm is about 90 kilometres north of the islands in the southern archipelago where Sweden's military was understood to be focusing its search on Tuesday.

But a military spokesperson confirmed to The Local that Sweden's armed forces were monitoring the entire archipelago area which includes Vaxholm "from north to south".

Full timeline of the sub hunt
Agnes Jonsson, 25, a trainee teacher who works in the town’s main supermarket says she isn’t concerned about a threat from Russia or elsewhere.
“I don’t know if it is something [going on] or if it is just for publicity or whatever. I don’t know if it is going to affect us, but the people I have talked to are not too worried”.
Waiting for a bus with her six-week-old baby Charlie, she says that even after five days in the headlines, the mystery submarine remains a big talking point for locals in the town.
“We’ll see if they find anything, then I think people are going to get worried,” she adds. Agnes Jonsson says she is not concerned about a foreign threat in Sweden. Photo: Maddy Savage

On what is a grey drizzly afternoon, Swedish television crews and local newspaper reporters are also visible in Vaxholm as they quiz locals about their fears and dig for tip-offs about military search sites in the region.

“No we don’t have any clues, sorry,” jokes one SVT reporter as she scrambles off a water taxi and heads into the town centre.
Sub hunt: latest details
The drama is downplayed by Fredrik Jonsson, 24, who runs a tobacco stall in the town:
“I don’t know if it is the Russians or why they are even in Sweden. It seems that everyone is getting worked up about either Russia or Ebola at the moment. I think it is all a bit overplayed,” he tells The Local.
Most residents have little to say about the Swedish military’s decision to withdraw from the town in 2006, but back on his water taxi, Bosse Linden has some strong views about the state of his country’s armed forces.
“Twenty years ago we had a big navy, we had a big coastal artillery,” he says.
“Instead of taking care of our own borders…we help others, but we have forgotten to help ourselves."