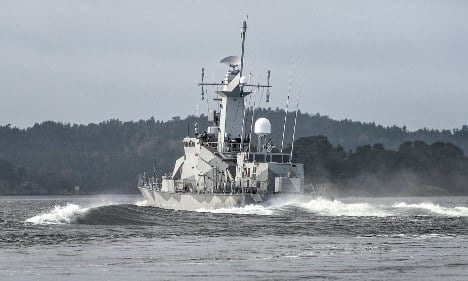 Sweden's Armed Forces are out in force after reports of a foreign vessel in the Stockholm archipelago. Photo: TT
Thursday 16th October
– Swedish intelligence hears a distress call from a vessel in the Stockholm archipelago, according to the Svenska Dagbladet newspaper (SvD).
– Swedish military will neither confirm nor deny report.
Friday 17th October
– Two civilians report sightings of a foreign vessel near Stockholm at Kanholmfjärden and Nämdöfjärden.
– Sweden's Armed Forces deploy over 200 troops.
– The operation marks the largest domestic military effort for Sweden since the Cold War.

Swedish troops have been searching out at sea and on the land. Photo: TT
Saturday 18th October
– Sweden intercepts further communications between transmitters in Stockholm archipelago and Russian enclave of Kaliningrad.
– Jesper Tengroth, press officer for the Swedish military, says the search "will continue until we consider that we are done".
– Experts suggest the distress call may mean the vessel is a damaged sub.
Sunday 19th October
– The Swedish Armed Forces release a picture (below) taken by a Swedish civilian in Jungfrufjärden that morning.
– The man, who has remained anonymous, told the Aftonbladet newspaper: "It was definitely a submarine, I'm certain about it".

An enlarged look at the mystery sighting. Photo: TT
Monday 20th October
– Russia denies the craft is theirs and suggests it is Dutch.
– The Netherlands deny the craft is theirs.
– Swedish Armed Forces set up exclusion zone – no civilian flights under 900 metres in the area.
– Sweden's Prime Minister Stefan Löfven says "there is no submarine hunt underway", calling the work "an ongoing intelligence gathering operation". The Swedish military has been searching for the craft all week. Photo: TT
Tuesday 21st October
– Search continues "at full strength" in the Stockholm archipelago.
– Press conference from Armed Forces expected around lunch time.
– The Local has been told that the search is continuing across the archipelago and not just in the south.
Wednesday 22nd October
– Hunt pushes into day six, with military announcing no plans to downsize the search operation.
– Armed Forces confirm they have received over 100 "interesting" tips from the public.
– Armed Forces say hunt is moving into "new phase" but reveal very little about what this means.
Thursday 23rd October
– Day seven of a much reduced hunt effort.
– Still no reported sighting from the Armed Forces.
Friday 24th October
– Search is called off
– Armed forces say they are convinced 'foreign underwater activity' took place said any suspect vessel had now left the area
Friday 14th November
– Sweden says it has conclusive evidence that there was a foreign vessel in Swedish waters.