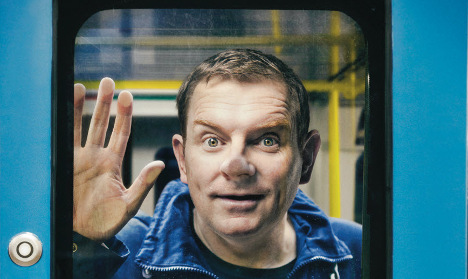 Comedian Al Pitcher has launched his new tour. Photo: www.alpitcher.com
Why should people come and see your new show: Nääämen: It's Al Pitcher?
Because it’s a unique laughing experience. It’s very much a one-off show, each night is different. It sounds like I’m reading a t-shirt slogan for a company! There’s no message to the show other than laugh as hard as you can. Get the work out that you need on your abs. I try to put up a mirror to the Swedes – if you’re coming from the expat land, you’ll understand most of the problems I go through every day. Comedy is all about what happens in the room, the audience plays a big part. You don’t want to make anyone feel weird about the gig – they should feel like heroes.

The show is about being an expat in Sweden but you’ve been here for five years now. Is it possible to ‘stop’ being an expat?
I think you should always try and be a tourist, and learn. My first two tours were very much about funny words and bits like that. This one also has the reference to ‘näämen’ but it’s more about me going into the Swedish society a bit more. The thing about Swedish people that I love is that they take things for granted. They don’t think something’s strange until you go “What’s happening there?” and they go “Jaha!” and kind of get it.
Oh, I just got yelled at – kind of like a One Direction member! Did you set this up?!
We absolutely set this up, just one of many surprises you’re in for.
Haha, but yeah anyway, the "Jaha" moments… you learn about this stuff all along. When I was researching for a show about the best things to do in Sweden, I was amazed to find quite a lot of weird sites hating Sweden – saying “hate the place”, “the Swedes are rude”… I think even though you’ve been here for a while, you still have to mold into it a bit.

What’s the funniest thing that’s happened to you in Sweden?
I think it was, if I’m looking – I sort of don’t want to give away too much from the tour – but in my last tour [Fika tour] I was talking about how birthdays are celebrated here. No one told me it was going to happen but at 3am at my wife’s parents’ place, they all came in singing weird shit holding a tray of coffee, fika, and a Swedish flag – as if you don’t know where you are!
Well, it was three in the morning, a little reminder could be useful.
Haha, right! I was totally surprised by it. It’s the surprise I like – the “nääämen”. I love it. I try to discover things, I don’t necessarily write just for Sweden. I love noticing the things that they [the Swedes] don’t notice.
Oh, there you have it, the quote: "He notices the things that they don’t notice"…These bells are the loudest bells I’ve ever heard – in my life. Are you behind this too?
I warned you we’d keep you alert.
Some woman just took a picture of me. I’m sure you’ve exceeded your budget by now…
How is all of this making you feel?
The fame thing doesn’t happen to me – and I don’t want it. I just want to make as may people as happy as possible. That’s the aim: to be the funniest person in the pub. So what would you say works and what doesn’t work when you’re performing to a Swedish crowd, compared to an international one?
I did my comedy apprenticeship in Britain, where people go to a gig thinking “I’m going to rip the shit out of this guy”. The audiences here don’t do that. For me, I don’t find it a boring politeness, it’s more a slight amount of respect. The Swedes give you a little more time. I think the main thing is not to abuse that but appreciate it.
There were a few things early on when the Swedes had no idea what I was talking about. They didn’t know what a magpie was and I had a bit about how I went to nick a cow and the audience thought I had stabbed a cow, which is not at all what I was talking about.
Swedes have a reputation for not being as funny as other nationalities. Is this true?
No, I disagree with that. I think they’re really funny – funnier than they actually realize. I think when I first came here I thought they were going to be a bit reserved and quiet. But I love the Swedes – they’re like a walnut: once you break the hard shell and get in there, they’re great. I really think that.
Al Pitcher's new tour – "Nääämen, It's Al Pitcher" – started on Tuesday night in Stockholm. For tour dates and tickets, click here.
Words by Mimmi Nilsson