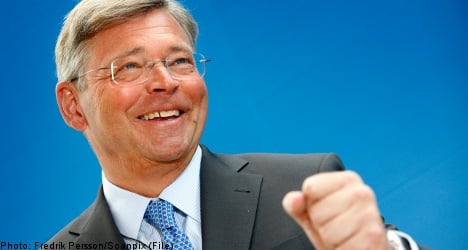 Nordea's Chief Executive Christian Clausen. Photo: TT
"In the third quarter we continued to welcome more new customers and were trusted with more savings, thereby passing the milestone of 250 billion euros in assets under management," the Swedish lender's Chief Executive Christian Clausen said in a statement.
"Nordea once again was confirmed as one of the safest banks globally," he added, referring to the low interest rate the bank secured for borrowing on the dollar market.
The Nordic banking giant's net profit shot up by more than a fifth (21 percent) to €938 million, compared to the same quarter last year. It would have been higher if it were not for a €344 million euro bill for a future IT overhaul to improve banking and payment systems.
Nordea said it has increased its activity despite slow growth in the region and a worsening global economic outlook. Turnover from loans grew by 1 percent compared to a year ago.
"As in the previous quarters, the third quarter was characterised by macro headwinds with low growth, low volatility and even lower interest rates," the bank said.
"The hope for a global recovery has been reduced due to geopolitical tensions, which also affect the export-oriented Nordic economies."
Nordea, which employs 29,500 worldwide, also announced that it had cut costs by 2 percent compared to the last quarter.