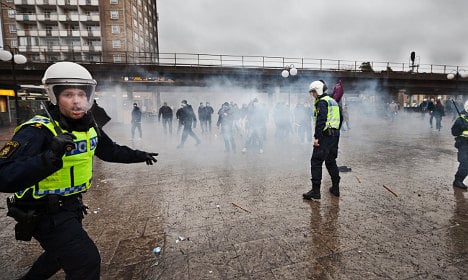 Södertörn district court said it could not prove that the three members of the Swedish Resistance Movement (SMR) had carried out a knife attack in the Stockholm suburb Hökarängen, despite witness testimony from a man they knew.

But the court did find two of the same suspects guilty of racial agitation and rioting at an anti-racism demonstration in another suburb, Kärrtorp, a week later.

The pair were each sentenced to seven months in prison.

News of the demo last December shocked Swedes, as neo-Nazis attacked a crowd that included families with small children.

Four other SMR members were jailed earlier this year for their part in the clashes, which left several people injured.

In the Hökarängen stabbing, the three suspects were charged with attempted murder and assault.

Two people were injured in the attack. One of them was struck by his assailants. The other victim, a visitor from Nigeria, received serious stab wounds.

The prosecutor said his attackers targeted the man because of his skin colour.

When questioned, one of the suspects, an 18-year-old SMR member, said he had used force “in self-defence” but denied taking part in a knife attack.

“You know, that really would be a very strict breach of our rules, to use violence unprovoked,” he told the court.

He said SMR was “absolutely not” a racist group. He agreed they were national socialists but said, “there’s a big damn difference”.

The two other suspects denied involvement in the attack.

The Nigerian victim said he was stopped by the men while out walking in Hökarängen.

“So I took out my earphones to listen to them and hear what they had to say. Then I was stabbed here, so deeply, in my stomach,” he told SVT’s Uppdrag Granskning, an investigative news programme.

The court said the only evidence tying the suspects to the attack was the testimony of an acquaintance, a man who was also previously a suspect in the case.

Testimony of this kind “has to be treated with special care, and it alone is not sufficient for a guilty verdict,” said Judge Sara Rosén in a statement.

The court said it also took into account the fact that the witness only stepped forward after seeing pictures of himself on the television show, and his testimony could be viewed as an attempt to protect himself.

The court sought to contact him again but was unable to find him.

The three men were also cleared of involvement in an attack on another man on the same night in December 2013.

Surveillance footage showed the suspects following a man and beating him on the platform at the Hökarängen metro station.

The events shown in the video were partially obscure, however, and the men were able to argue they had acted in self-defence after the camera caught the alleged victim striking one of them on the head with a bottle.