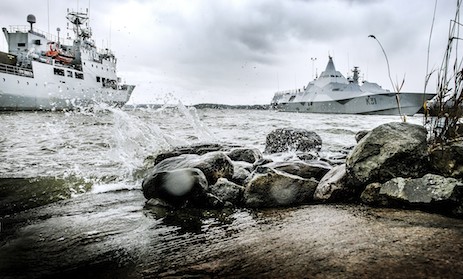 Ships are returning to shore in Sweden. Photo: TT

Rear Admiral Anders Grenstad said  at a press conference on Friday morning that Sweden's armed forces had probably been tracking a "small vessel" in recent days and definitely not "a larger, conventional submarine", in the waters off Stockholm.

"Whoever it was that violated our waters has left," he said, adding that the incursion was "completely unacceptable".

A military expert The Local spoke to earlier this week said a midget submarine or a torpedo-like vessel was the most likely focus of the operation.

Asked if the operation had been necessary, Defence Minister Peter Hultqvist said he trusted the judgement of the armed forces.

"We have to act when we receive credible reports, as we did in this case."

Sweden's military had been gathering intelligence on what experts said was a suspected Russian submarine off the coast of Stockholm for a week.

Warships, minesweepers, helicopters and more than 200 troops scoured an area about 30 to 60 kilometres (20 to 40 miles) from the Swedish capital following reports of a "man-made object" in the water.

Rear Admiral Grenstad said Sweden had not identified the nationality of the intruder, adding: "I have never pointed to a specific nation".

He confirmed that the main part of the maritime intelligence operation had concluded on Friday morning.

This means that ships are returning to their bases with only smaller military units remaining in the region.

Grenstad raised eyebrows last weekend by revealing that Sweden had observed a pattern of foreign underwater development over a period of several years.

On Friday, he said the armed forces always kept the parliament's defence committee abreast of developments of this kind.

"If this is the case, why did it stop with the politicians? Why haven't we been informed? And most importantly, why have there been so many cuts to the defence budget if Swedish territory is being violated on multiple occasions?" Rear Admiral Grenstad said the armed forces would now analyze recordings made with the help of underwater sensors.

"We have made the assessment that we're not going to get any more information out there. We have enough information."

Russia has denied it was the source of the suspicious underwater activity, blaming a Dutch submarine for triggering the submarine hunt, a claim rejected by the Netherlands.

The massive military operation this week evoked memories of the 1980s for many Swedes who recalled dozens of occasions when the Nordic country's navy was in hot pursuit of suspected Russian submarines.