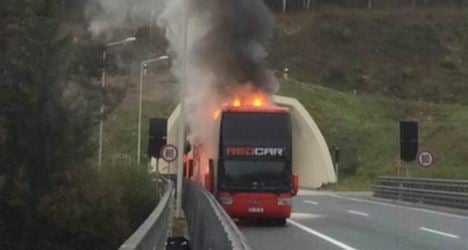 The group was heading towards a gig in Italy, and had just been picked up by the bus in Graz.  Around 8am the driver noticed that something wasn't right.

He stopped the bus to check the back door, and noticed smoke.  He immediately ordered the evacuation of the bus.

Deathstars singer Andreas Bergh told the Swedish newspaper Expressen "It had something to do with the electrical system. All of a sudden he shouted that the bus was on fire."

"It only by a stroke of luck that we got out of the bus in time," the singer added. "We could have died in there."

Around sixteen people were reportedly traveling on the bus, some of whom were sleeping.

Within minutes after the evacuation, the rear of the bus caught fire and exploded, damaging the trailer containing the band's instruments.

Ironically, the last Austrian venue they played at before the incident was called "Explosiv."

"Luckily, some of us were awake" when the incident happened," Bergh said. "Had we been stuck in the tunnel at the time of the explosion, we would have run the risk of everything becoming one big puff of smoke and a truck slamming into the bus. It could have been a disaster." "Psychologists and police and nurses are here," Bergh told Expressen. "We are still in shock over the fact that we made it out alive."

He added: "We may cancel the gig in Italy, but we're going to Munich [Germany] late [Saturday] so hopefully it will go well. We plan to continue the tour."

Bergh thinks it will take a while for the band to get over the emotional stress of the accident.

"It was really extremely, extremely close, and it could have been much worse," he said. "Imagine the whole damn bus catching fire while you are sitting inside it, and then it explodes."

"We literally had gotten out with seconds to spare, since the incident happened just outside the tunnel."