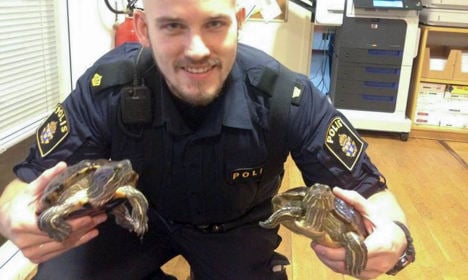 A Stockholm police officer on a particularly "slow" work day. Photo: TT
Police were called out on Sunday to a shop in Haninge after someone found a box on the doorstep containing two turtles.
The terrapins, known as red-eared sliders (trachemys scripta elegans), were apparently abandoned by their mystery owner.
"Someone had just dumped them there," officer Christina Ekström told the TT news agency. A closer look at the turtle's red stripe. Photo: Greg Hume/WikiCommons
When the pet shop realized they couldn't house the turtles, they called the Södertörn police, who came and collected the sliders and then dropped them off at the Skansen animal park in Stockholm.
The park said they would assess the turtles' health and decide whether to make a home for them or put them down.
Red-eared sliders, which don't have particularly noticeable ears at all, are a common house pet around the world.
The popular comic book characters The Teenage Mutant Ninja Turtles are based on this particular species.