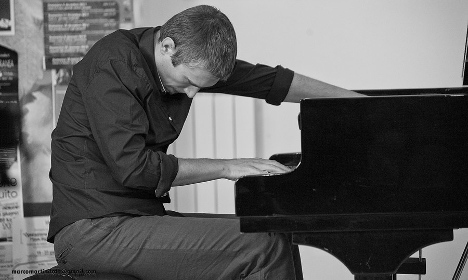 Italian Luigi Bozzolan's life revolves around music. He's a pianist, a composer, and a music teacher and moved to Gällivare in northern Sweden’s Lapland just two weeks ago to work at the region's Culture School (Kulturskolan), where pupils aged 6 to 22 learn a variety of performing arts.

His focus is on improvisation, contemporary music, and jazz – genres which are deeply rooted in Sweden's music culture. It was this well-established music scene that was the driving force behind Bozzolan’s decision to move to Sweden for the first time in 2010, when he was based in Gothenburg.

“I think music in Sweden, especially jazz and improvisation, is special. There’s a special sound of improvisation that’s being played in a new way, it’s very avant-garde. This is the main reason why I chose to live in Gothenburg,” he tells The Local.

For three years, Bozzolan studied improvisation at the Academy of Music and Drama in Gothenburg under Anders Jormin, a renowned bass player and composer. This was enough time for Bozzolan to make lasting relations with other musicians, some of whom he's still collaborating with today. After a short return to Italy last year, he’s now living in Sweden again, hoping to extend his connections and cooperation in the north. He doesn’t shy away from seizing the opportunity to play wherever he can, with as many musicians as possible.

“It would be really great to use this experience of living in Lapland. So during these six months I want to invest my time looking for good musicians whom I can play together with.”

Sweden is internationally recognized for its many annual festivals, some of which are Scandinavia’s largest and celebrate the deep love and passion that many musicians from around the world share for jazz and improvisation. Bozzolan says he feels at home among this unique network of dedicated individuals and says he's ready to continue to come back to Sweden over and over in the name of music.

Bozzolan says his new opportunity allows him to continue to compose and study music, as well as teaching it, all while being situated in a unique landscape which he hopes will be a great inspiration.

“I don’t want to imitate sound – I want to bring my personality, learn, and listen to what happens around me to connect my style with it.”

He says that there’s a focus on listening among Swedish musicians, something he believes to be related to a more cooperative and egalitarian approach in Sweden compared to Italy.

“I think Sweden is, right now in this experience, a perfect place to give and also to take, and share experiences in general when it comes to art and life.”