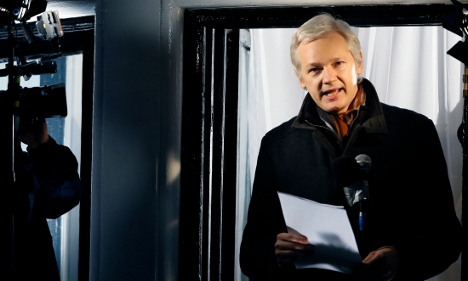 The Svea Court of Appeal in Stockholm has been considering whether or not to drop the arrest warrant against Julian Assange, who is wanted over rape and sexual assault allegations made by two women in Sweden.

A spokesperson for the court told The Local that the chief prosecutor Marianne Ny had "responded" to the Australian's appeal on Monday afternoon and that the relevant legal documents outlining her response were now being considered by Assange's legal team.

If the court accepts his appeal, it could mean that Julian Assange is able to leave the Ecuadorian embassy where he has been holed up for the past two years since he was granted political asylum there.

The Wikileaks founder has said he fears arrest if he leaves the embassy and that if he is called to stand trial in Sweden, he may also be sent to the United States to face charges linked to WikiLeaks publishing a horde of sensitive military and diplomatic communications.

Swedish prosecutors said last month that the idea was "far-fetched".

"We will win because the law is very clear. My only hope is that the court is following the law and is not pressured politically to do anything outside of the law," he said via a video link screened at a human rights film festival in Barcelona.

"As time goes by, political pressure decreases and understanding increases. So I am very confident I will not remain in this situation. I'm completely confident," Assange said.

The British government has said it hopes that Swedish prosecutor Marianne Ny will travel to London to question Assange.

On Monday, Wikileaks published an extract of Julian Assange's new book, in which he claims that Google has been colluding with the US government.