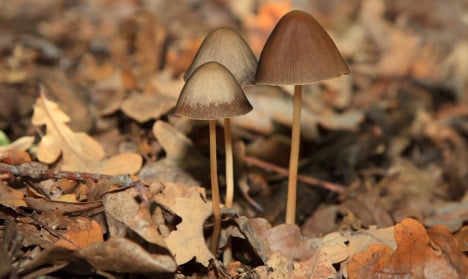 The mushrooms in this picture were not the ones ordered by the Green Party politician. Photo: Shutterstock
The man was convicted in 2012 for drug smuggling after he ordered mushrooms from the Netherlands containing Psilocin.
The order, which cost the politician 581 kronor ($80) and weighed 42.7 grammes, was confiscated by Swedish customs.
The Green Party's State Secretary Per Ängquist revealed that both Deputy Prime Minister Åsa Romson and Green Party Co-Spokesperson Gustav Fridolin were aware of the conviction when the man was recruited.
"His conviction was well known to me before I decided to recruit him." he told The Local.
"He has been extremely open about it and has confessed to all the facts of the story. He has served the punishment given to him by the court and has since been through a security control before entering government office."
Ängquist added that he had "full confidence" in the Green Party member, who regrets his actions.
In the court documents, which The Local has seen, the politician explained that he was "drunk and feeling ill" when he made the order.
"For some reason, he sat at his computer and ordered the mushrooms via the internet and must have even paid for them somehow," the court wrote.
Due to his intoxicated state, the politician explained in court that he "couldn't confess to or deny the crime".
The Green Party politician risked up to two months in prison, but was sentenced to 75 hours of community service.