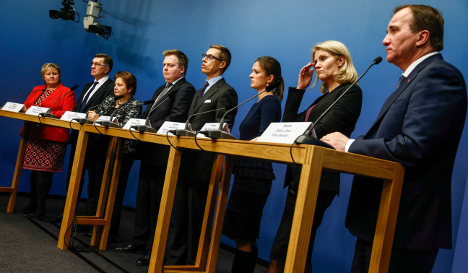 Stefan Löfven (far right) with his international guests. Photo: TT
Sweden's Social Democrat leader was meeting officials from the five Nordic countries and the three Baltic states at a Nordic-Baltic summit in Stockholm.
The Prime Minister introduced Danish Prime Minister Helle Thorning-Schmidt, before falling silent, fumbling with his notes and then saying in English "I have received the wrong papers".
After speaking with a press officer he recovered his composure and presented Estonia's Foreign Trade Minister Anne Sulling and the other international attendees.
But the mistake was slammed by social media users across the region after footage of the event was shown on Swedish news website Dagens Nyheter and other news sources.

At next week's #NFFHelsinki let's hope the new PM from #Sweden has done his homework on the names of other PMs… http://t.co/fOmC6EwGcl

Stefan Löfven, a former welder, had no previous experience in local or national government before he was appointed as Prime Minister following September's general election in Sweden.

During the Nordic-Baltic summit, politicians discussed Russia's growing military presence in the Baltic and Sweden's controversial decision to recognize Palestine as a state.