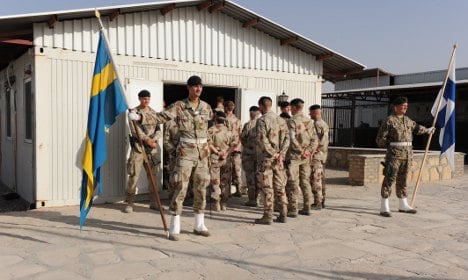 Swedish soldiers in Afghanistan. Photo: TT
The Social Democrats voted against the previous centre-right coalition's decision to abolish military service for men and women in Sweden in 2010.
Now that they are in government alongside the Greens, they are considering reintroducing the idea.
Defence Minister Peter Hultqvist told Sveriges Radio that there was broad support for the concept in Sweden's newly elected parliament.
He said that there was currently a problem retaining soldiers, with many choosing to leave the army or navy after just three or four years.
The development follows the biggest military operation in Sweden for years, with more than 200 troops scouring Stockholm's archipelago for a suspected foreign submarine last week.
The search was called off on Friday after the Swedish military said it believed the vessel had left Swedish waters.
During the search, Bosse Linden who served in the Swedish navy for twenty years told The Local he felt it was a mistake that Sweden had scrapped conscription and reduced the size of the country's military.
“Twenty years ago we had a big navy, we had a big coastal artillery,” he said.
“Instead of taking care of our own borders…we help others, but we have forgotten to help ourselves."