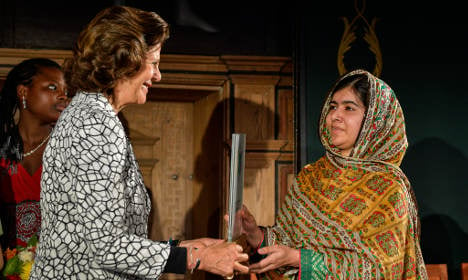 Malala was shot in the head in 2012 by the Taliban near her home in Pakistan for supporting the rights of young girls to attend school.

Millions of children voted for the 17-year-old to win her latest prize, said the World's Children's Prize organizers in a statement.

"Nobody has ever received the Nobel Peace Prize and the World's Children's Prize — often dubbed the 'Children's Nobel Prize' by the media — in the same year," it added.

Malala was in Mariefred, south of Stockholm, to collect the award on Wednesday afternoon. The prizes were handed out in the Gripsholm Castle in a lengthy ceremony attended by Queen Silvia and Prime Minister Stefan Löfven.

Malala said she was deeply honoured to receive the award.
"My message to children is that your voices are important and you should believe in yourself," she told the crowd.
Malala announced that she would donate all $50,000 of her winnings.
"This money will totally go to the rebuilding of schools for children in Gaza, so I think it will definitely help those children to continue their education, to get quality education," she told the crowd.
"We already know how children have suffered in Gaza from conflicts and war, so those children need our support right now, because they are going through many difficult situations."
The money will be donated via UN Palestinian refugee agency UNRWA and will help rebuild 65 schools in the Gaza Strip.

Press and curious onlookers flocked to the castle for the awards. Photo: The Local

Queen Silvia presented the awards in Sweden after a ceremony on Wednesday, which included musical performances from children around the world. Malala was scheduled to have a private audience with new Prime Minister Stefan Löfven afterwards.

The World's Children's Prize was created in 2000 as part a worldwide educational programme designed to help children learn about global issues, democracy and their own rights.

The programme finishes with a global vote on who to give the prize to. This year, other honorary awards went to former Microsoft executive John Wood, founder of the Room to Read literacy group, and Indira Ranamagar from Nepal, for her work with the children of prisoners.

This year's winners will share a prize of $100,000 to be used in their work for children's rights.