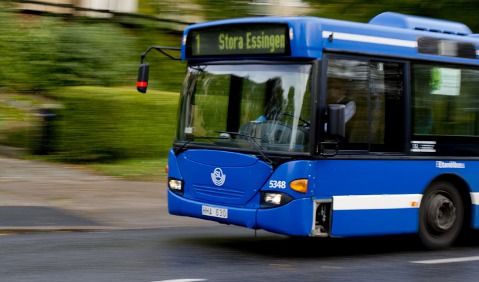 An SL bus in the Swedish capital. Photo: TT
The company says it is unsure if the network was hacked into or if the messages came from staff working for SL.
Some of the messages are understood to have been both racist and sexist, while others contained false traffic information.
It has emerged they were sent to drivers making journeys in the Swedish capital on several occasions over the past week.
"We're looking into who exactly transmitted these messages and why they did it," Jesper Pettersson, press officer at SL told The Local.
The communication system used by bus drivers in the Swedish capital is run and owned by Stockholm transport company SL. Pettersson said that only the drivers were able to read the text messages, which were displayed on a screen near the steering wheel, and that passengers were unlikely to have seen any.
"We don't know how this is happening, but we have launched an investigation and plan to get to the bottom of it," added Pettersson.
Police are now carrying out a separate investigation.
Staff at the company's main depot in Rasta were reported to be "upset" by the situation and met on Wednesday to discuss their concerns, according to the Dagens Nyheter newspaper.
Url copied to clipboard!