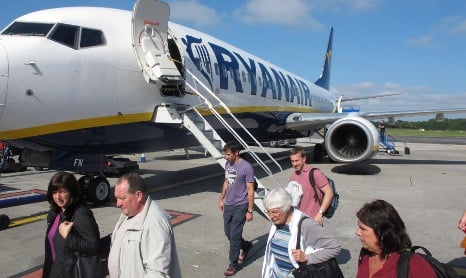 Ryanair is stopping flights from Sweden's Malmö. Photo: Shawn Potgatchnik
The company says it plans to offer more than a dozen new routes from the Danish capital and will wind down its operation in neighbouring Swedish city Malmö.
Flights in and out of other Swedish destinations including Gothenburg, Stockholm Skavsta and Växjö are expected to continue.
Ryanair’s Copenhagen base will open in March 2015 and will consist of four aircraft servicing new routes to London, Milan and Warsaw with ten additional routes to be announced early next year.
The airline predicts that its Copenhagen presence will bring over one million customers a year to an airport that is already experiencing steady passenger growth.
Read more on The Local Denmark
Globally, Ryanair flies between 180 destinations in 29 different countries.
The company has more than 9,000 employees and takes approximately 81.5 million passengers per year.