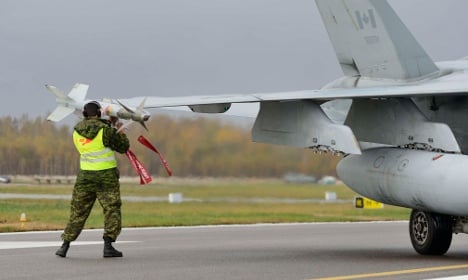 Nato troops are currently in the Baltic. Photo: TT

37 percent of Swedes questioned said they supported joining Nato compared with 36 percent who were against the idea.

It is the first time a survey has suggested that a larger proportion of Swedes back joining Nato as opposed to keeping out of the organisation.

In May 2014, just 28 percent of Swedes polled wanted to join Nato, compared with 56 percent of people who rejected the idea of signing up.

Nato (which stands for the North Atlantic Treaty Organisation) is an international organisation that includes various European countries as well as the United States and Canada.

It was formed in 1949, after the end of the Second World War.

Nato's aim is to ensure that its members don't fight each other, rather that they work together to safeguard security and cooperate on defence and security issues.

If diplomatic efforts fail, it has the capacity to organise and carry out joint defence operations when urgent military action is needed, for example in Afghanistan.

The organisation has recently expanded its presence in the Baltics, as tensions continue in the region as a result of the Ukraine crisis.

Crucially, member states are obliged to come to the aid of fellow members if they are subject to a military attack.

Sweden already has strong links to Nato and takes part in joint training exercises with Nato troops as part of the Partnership for Peace programme. Some see this as being Nato members in all but name, while others point out that Sweden isn't covered by security guarantees.

The Novus study, which was commissioned by TV4 News, comes less than a week after the Swedish military carried out its largest military operation in years in Stockholm's archipelago.

There were concerns that a foreign vessel – possibly from Russia – was in Swedish waters, but after an extensive search, Sweden's military said it thought that the suspected submarine had moved on.

The hunt, alongside more general concerns about the conflict in Ukraine, may have affected public opinion ahead of the Novus survey, reported news agency TT.

Another recent survey found that Swedes were more willing to risk conflict with Russia by helping Ukraine than people from any other European country.

The Swedish military's ability to defend the country if it came under attack has been under scrutiny since Supreme Commander Sverker Göransson said in 2013 that Sweden could hold its own for more than a week.

If Finland were to look more seriously at joining Nato the issue would likely rise further up Sweden's agenda.