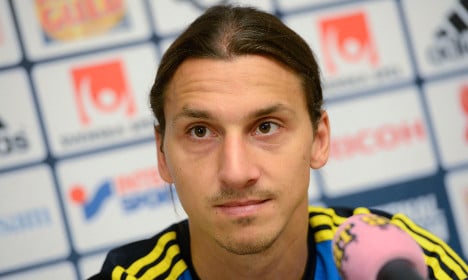 Photo: TT
Ah, Zlatan Ibrahimovic. Perhaps Sweden's greatest ever sports star with the arrogance to match. And now that he's been nominated for the Ballon d'Or, we figured we'd revisit some of his best moments.

1: Dutch reporter: "Can you describe 'Zlatan' – a lot of Dutch people don't understand?"
Zlatan: "I've never heard this question before, I think it's only you who doesn't understand."

2: An Italian female reporter asks if he is gay.
"Come to my house and you'll see if I'm gay. Bring your sister," he responds.

3: A reporter asks what Ibrahimovic will get his wife for her birthday.
"Nothing. She already has Zlatan."

4: When invited by Arsenal's manager for a trial.
"Zlatan doesn't do auditions."

5: After Sweden were knocked out of the 2014 World Cup qualifiers, a reporter asked if Ibrahimovic would head to Brazil to spectate. He responded:
"A World Cup without me isn't worth watching."

6: On house-hunting in Paris after being drafted in by Paris Saint-Germain.
"We're looking for an apartment. If we don't find anything, then I'll probably just buy the hotel."

7: A reporter asks why there are scratches on Ibrahimovic's face.
"You'll have to ask your wife that one."

9: When discussing his former coaches, Ibrahimovic doesn't appear to be hoping for a reference letter.
"Mourinho is Guardiola's opposite. If Mourinho brightens up the room, Guardiola pulls down the curtains. 10: Lastly, Zlatan's book and his app are full of colourful quotes. For example, when discussing a recent injury:
"An injured Zlatan is a pretty serious thing for any team."
All photos: TT