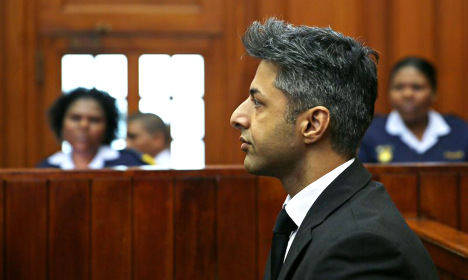 Dewani in a Cape Town court. Photo: TT
The testimony came after the Cape Town high court was shown footage of meetings between Dewani and taxi driver Zola Tongo captured on a hotel close circuit TV in which Dewani is seen handing a parcel believed to be money to Tongo.
Tongo told the court Wednesday that he had phoned Dewani on the night of his wife's shooting to ask about payment as his accomplices wanted to know where the money would be left.
Tongo said Dewani told him he would put the money in the pouch behind the front seat of Tongo's vehicle.
Dewani is accused of masterminding the killing of his Swedish-born wife, Anni, whose body was found in a car outside the city in November 2012.
Tongo is serving an 18-year jail sentence for his role in the murder and his accomplice Mziwamadoda Qwabe was given a 25-year term.
The hitman Xolile Mngeni recently died in prison after being diagnosed with a brain tumour.
Dewani has pleaded not guilty to charges of murder, kidnapping, robbery with aggravating circumstances, conspiracy to commit these crimes and defeating the ends of justice after he was brought to South Africa after a lengthy extradition battle.
Anni Dewani's body was found in Tongo's abandoned vehicle near Khayelitsha township outside Cape Town.
Tongo testified that Dewani had promised him 5,000 rand (around $500) for his role in his wife's killing. The hitmen were to receive 15,000 rand.
Tongo's cross examination continues Thursday.