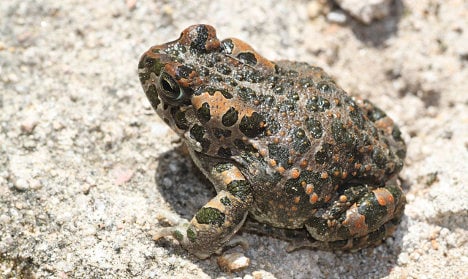 The European green toad. Photo: H. Krisp (WikiCommons)
The European green toad is Sweden's most threatened toad species, and until recently could only be found in scattered areas around the country's south.
After reintroduction efforts by conservationists were successful, the toads found their way to the Norra Hamnen area in Malmö where construction workers were incidentally planning a 260 million kronor industrial area.
With the new arrivals belonging to such a rare species, the local government ruled that building plans would have to be scaled back by 15 percent in area to accommodate the amphibious immigrants.
Norra Hamnen now has an untouchable 153,000 square metre nature reserve, an area that could have been rented out were it not for the frogs, and which could have generated a potential annual income of 6 million kronor ($811,000), reported the Sydsvenskan newspaper.
Milan Obradovic, a local Social Democrat politician focusing on environment issues, told the paper Sweden had to lead by example when it came to protecting endangered species.
"We have to take responsibility. We can't just sit around demanding that other countries protect their fish and their tigers and then just plow right over the toads," he said.
Karolina Skog, a local Green Party politician, said the toads should be seen in a positive light, adding that they could become "an exciting new part of the area's profile".
The European green toad can be found in Europe, north Africa, and Asia. The female can lay up to 15,000 eggs.