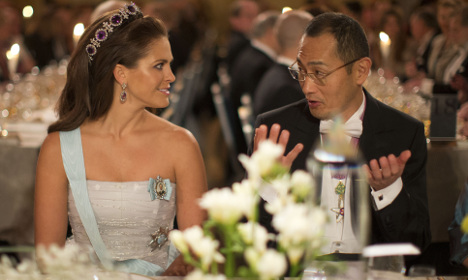 Princess Madeleine at a previous Nobel banquet. Photo: TT
The Swedish Royal Court said in a statement that "all the royal family" were planning to attend the annual Nobel banquet, which takes place after the Nobel Prizes are handed out in Stockholm.
It is also understood that Prince Carl Philip's fiancée Sofia Hellqvist will be at the party. The pair recently announced that they had set a date for their wedding.
This year's Nobel Prize winners include French author Patrick Modiano who took the Literature award and scientists Isamu Akasaki, Hiroshi Amano, and Shuji Nakamura who were rewarded for inventing blue LED lights.
Full list of Nobel Prize winners 2014
Princess Madeleine gave birth to Princess Leonore in New York earlier this year and the new addition to the Royal Family was baptized in June.
The baptism took place exactly a year after Princess Madeleine married her financier husband Chris O'Neill.
IN PICTURES: Princess Leonore's baptism