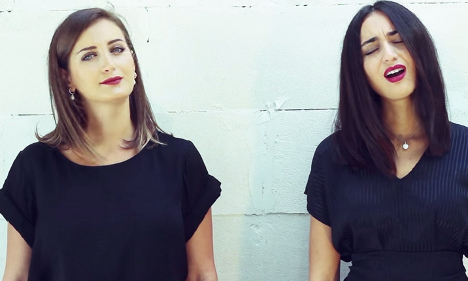 A shot from the video on YouTube.
Faia Younan who is 22 and her sister Rihan, 23, whose family hails from Syria, use the video to talk about what  they describe as the "crazy, selfish and illogical war" that has been going on in Syria for three years.
Speaking and singing in Arabic, they say they want the country to be "safe and prosperous and triumphant and dignified" once again.
They call on politicians on all sides to help resolve the conflict.
The video was posted online at the start of the month, but started to pick up momentum earlier this week following coverage in the international media.
Using the hashtag #ToOurCountries, thousands of people have been commenting on the film and its message.
"There are very many who have been in touch and thanked us, and they have told us that they had so much hope after seeing the video," Faia Younan told Swedish television network SVT.
"We wanted to show that there is a different perspective than what we see on TV every day with a lot of blood, destroyed buildings and people crying," she added.
"We wanted to remind people of the beauty of our country and that we have the hope that it will be good some day."

@Faiayounan @RihanYou I congratulate you guys, truly amazing work, you made me feel that there is hope, for the first time in forever!