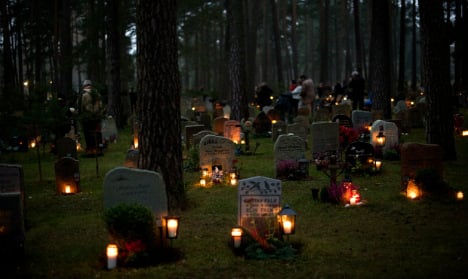 Photo: Cecilia Larsson/imagebank.sweden.se
All Saints' Day is more popular than ever and Swedes will turn out in droves to light candles at the gravesides of longed for loved ones across the country on Saturday evening.
The festival became popular in the post-war years inspired by the Catholic countries around the Mediterranean. When Halloween first came to Sweden in the 1990s many feared that All Saints' Day would suffer but these fears have proved unfounded.
According to a recent survey by Gothenburg's SOM Institute, some 51 percent of Swedes observe the holiday – double the figure who turn out for National Day on June 6th. The holiday has furthermore become increasingly popular in recent years despite the increasing popular festivities on Halloween the night before.
"So It was not true. What happened instead was that the Saints' weekend was elevated as a counterweight to Halloween and All Saints' celebration has escalated to something huge. More than ever adorn graves and light candles.

The video was shot at Skogskyrkogården south of Stockholm in November 2010 by Christopher Bennison, a native of Vancouver, Canada, who moved to Sweden in 2005.

A new innovation for 2014 is the option to light a light from the comfort of your living room, via the Church of Sweden website. Flicking the switch on your tablet will light a corresponding lamp at one of four designated light installations at cemeteries across Sweden.