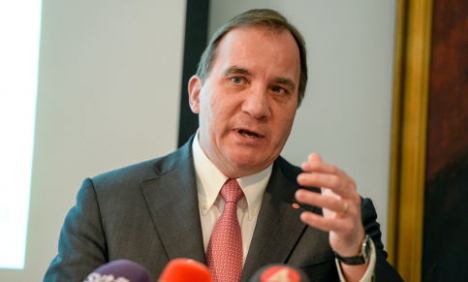 Sweden's Prime Minister Stefan Löfven. Photo: TT
Only 25 percent of Swedes responded that the government has done a good or very good job, with only 5 percent in the later category.
"There are significantly more people who think that the government has performed poorly than those who think it has done a good job. At the same time there are a large number who have answered neither positively nor negatively," said Toivo Sjörén at Sifo.
The Sifo/SvD poll confirms similar findings in a Ipsos poll published in the Dagens Nyheter daily last week which showed that 23 percent consider the government's first month to have been a good one, while 25 percent were negative.
The Sifo poll was conducted from ​​October 27-30 and is based on 1938 interviews.
The new Social Democrat-Green Party coalition government was presented barely a month ago and much of the interim period has been concerned with trying to piece together a budget which has a chance of getting through parliament.
With only 38 percent of the seats in parliament, the government is reliant on the support of the Left Party, and abstention of the Sweden Democrats, in order to get its budget passed.
A separate voter survey published by Novus on Sunday showed that confidence in the government is falling, with the Social Democrats (S) hardest hit. S have fallen back 0.8 percentage points since the election and have the support of 29.2 percent of the electorate, according to the poll.
The Green Party has meanwhile recovered somewhat and enjoys the support of some 8.5 percent of the electorate.
Among the opposition Alliance parties, the Moderates have rebounded the most – from 23.3 percent to 24.4 percent.