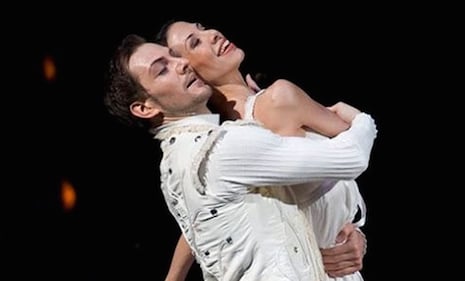 Gina Tse radiates experience and authenticity as she meets with The Local to share her unfolding story.

“I never really thought ahead or had the idea that I would get into a big dancing company, let alone become a Prima Ballerina. I just did what I loved,” she tells The Local.

Starting dancing at an early age, ballet was always a focus in Tse’s life. Between eight and eighteen, she followed the traditional path of committed British ballet dancers and trained at the Royal Ballet School in London.

She began with a weekly class, got accepted into the institution's boarding school, and later finished its upper school programme.

Tse’s life revolved around ballet. But one day she suddenly decided to quit the scene.

“Ballet is rigid, you do as you’re told and you don’t speak, you listen and take direction. I didn’t want to do it anymore. The love had died a little bit," she says.

For five years, Tse stayed away from ballet but remained a performer, substituting classical dance for musical theatre in London’s West End. She was part of many productions but describes working on The Lion King as the best time of her life.

“In musical theatre you do one show and you have to keep it alive, every day. That’s challenging. The experience was a good learning curve for me.”

Gina Tse and her son Jacy in Stockholm. Photo: Private

Dating a Swede at the time, she says she moved to Sweden not because of, but rather thanks to, the love for her then partner. The deciding factor was getting a job in the capital, dancing at the Royal Swedish Opera.

“I wasn’t going to move without a job. You need to have your own security – as long as you have a job, and your partnership breaks up, you still have yourself and your independence. And that goes for moving anywhere,” she says.

The relationship ended shortly after their move but she retained her position at the Royal Swedish Opera, and today she holds the highest and most honorable title achievable in ballet – she’s the lead dancer, or Prima Ballerina there.

Aged 35, Tse’s adventure hasn’t stopped, but because ballet dancers retire at the age of 42, she’s coming towards the end of her career. She’s accepted this fact, saying she’s not worried because “I’ve not always been in the ballet world.”

Her plan is now to pass on the knowledge that she’s gathered along the way to young people and children in Sweden.

“I want to teach children, inspire, give knowledge, and provide as much help and guidance as possible,” she says.

Tse has already started to coach 13 to 14-year-old girls in Stockholm and says they inspire her with their passion and eagerness.

She has also spent many summers at her sister’s dance academy in Hong Kong and has previously taught in Cyprus. She doesn’t limit her teaching to ballet, either.

“I love all kinds of performances – at the end of the day, we’re all the same, be it modern, hip-hop, ballet…its so easy to get narrow minded but it’s important to keep a broad perspective, to appreciate every art form.”

Together with Anneli Alhanko, who coached Tse when she did Swan Lake a few years ago, she’s now discussing the possibility of teaching younger expat children who have spent more time learning English than Swedish.

“Being in a group of Swedes and not really understanding might be intimidating. I want to start this for them – give them the opportunity to feel comfortable in their environment.”


Gina is already enjoying introducing her son and his friends to ballet. Photo: Private

Tse says ballet has always been the one constant in her world, when her personal life has been in turmoil and she wants others to better understand its therapeutic properties.

“It’s such a special world, I think that’s why it’s so intense when you leave it.”

Ballet will always be a part of Tse’s life, in one way or another. And she uses a stage analogy as her key advice for others:

“Life is no dress rehearsal, go for it, whatever you do, to the fullest.”

Interview and words by Mimmi Nilsson