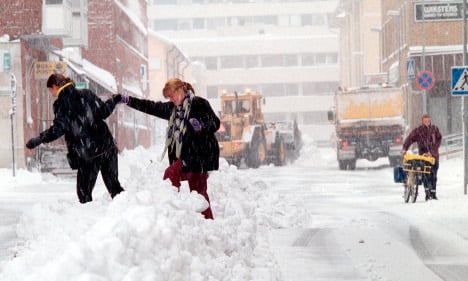 A snowstorm in Luleå, northern Sweden. Photo: TT
Meteorologists at weather agency SMHI said that northern Sweden could expect heavy snowfall on Tuesday and temperatures as low at -20C.
The snow will hit Ångermanland, Härjedalen, Jämtland and Västerbotten as a low pressure system heads north.
SMHI said that there will likely be traffic disruptions.
It issued a class-two warning, the second most severe on its three scale warning system.
Those in the capital won't escape the wild weather either – snow is expected to hit Stockholm and other parts of southern Sweden late on Wednesday night, reported the Svenska Dagbladet newspaper.