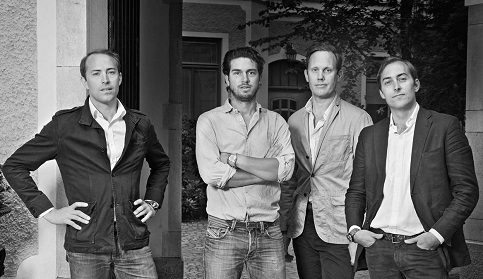 The founders of TRIWA. Photo: TRIWA

Sweden is characterized by style, beauty, a sincere pleasure in the simpler things in life – and a desire to preserve its heritage. TRIWA watchmakers are a prime example.

“We were four friends who were all watch enthusiasts,”  Ludvig Scheja, creative director at TRIWA, told The Local.

“We saw that the watch was disappearing, more or less because the time function was presented on all gadgets, so there was no need for the watch in the same manner as it was presented before.”

They weren’t about to let that happen. The Stockholm quartet – Scheja along with Harald and Didrik Wachtmeister and Tobias Ericsson – decided it was time for a revolution. “We started to look at the watch industry to see what they did wrong,” Scheja said. “We saw that the designs were extremely conservative, despite a young, changing audience.”

The men looked at every aspect of the watch industry, in terms of design, distribution, and marketing in the most minute of details. And in 2007 they turned it on its head with TRIWA – “to revolutionize the industry of watches”, pure and simple.

“One of the first things we did was to find new ways of marketing,” Scheja explained. “We reached out to blogs, which were a rather new phenomenon at the time, and collaborated with them.”

And those typical glass cases housing watches beyond the reach of shoppers? TRIWA turned the other cheek.

“We went for fashion and lifestyle stores with a much more attainable concept, and had them out openly so people could really look and try them on.” TRIWA’s first collection that year consisted of just 400 watches – but they made an impact. The marketing and distribution techniques worked, and the designs were a hit. The next batch was 1,200 watches, and the brand continued to climb, slowly but steadily.

And with a little bit of Black Monday magic, TRIWA used a tongue-in-cheek design to turn the stock crash of 2008 into a massive publicity boost.

“We made a watch called Black Monday, and the text on it said it was recession proof, as opposed to waterproof,” Scheja said. “The second hand was shaped like a falling stock index as well.”

The watch became a hit with financial papers and soon fashion magazines – a recession-proof version of the Rolex.

“It got a lot of positive PR at that time. It was cooler at that time, since it wasn’t cool to be seen with luxurious brands and products.”

Granted, TRIWA is its own version of luxury while remaining accessible, like much of the Scandinavian design world.

With strong sales across the globe, TRIWA has become a new trend in the US as well, as the second most-searched for Swedish watch brand. Word has it that TRIWA watches dangle on the wrists of Rihanna, Kanye West, and Justin Timberlake – not to mention Sweden's own Princess Madeleine.

But despite the brand’s growing fame and reputation, today the team only consists of about 15 people working in closely-knit Stockholm office.

“We do everything, all of the small details, ourselves,” Scheja said. “We work with two designers and an art director, and me. We have mood boards and meetings, and the sales staff also come with ideas.”

The designs are inspired by classical watches, but infused with a healthy dose of contemporary Scandinavian style – the key to the watch revolution.

“We understand the concept of the watch as a style symbol rather than a status symbol.”

And Scheja said that all TRIWA designs are driven by one crucial principle:

“We only design watches that we ourselves want to wear."