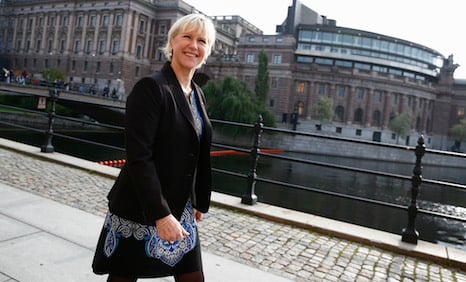 Margot Wallström, who was selected as Sweden’s Foreign Minister last month, has described recent reports of increased military activity around the Baltic Sea as “disturbing” and said she is “shocked” by the situation.

Speaking to SVT’s Agenda programme on Sunday night, she acknowledged that a large number of Russian military aircraft had been active in the region over the past week, less than a month after reports of suspicious underwater operations in Stockholm’s archipelago.

At the time a foreign vessel was believed to be in Swedish waters, the government and the Swedish military chose their words carefully and did not suggest it belonged to Russia.

But asked about the Russian military presence in the area, she said:

“It worries me and I also think Swedes in general, as well as all the other countries around the Baltic Sea”.

She added that she was “surprised” how things had turned out “after the Cold War and all the attempts to engage with Russia”.

As pro-Russian separatists held elections in eastern Ukraine on Sunday, a vote not recognised by the EU, she said:

“It is bad. It is an election that is not legitimate…We are protesting against it”.

The Foreign Minister also said that Sweden was ready to defend its territory if necessary.

“As in Ukraine, we are entitled to our territorial integrity”.

Her comments came days after a poll suggested more Swedes are now in favour of their country joining Nato than are against the idea.

In the survey for Novus, 37 percent of Swedes questioned said they supported joining Nato compared with 36 percent who were against the idea.

It is the first time a survey has suggested that a larger proportion of Swedes back joining Nato as opposed to keeping out of the organisation.

Sweden's Defence Minister Peter Hultqvist has also suggested that compulsory conscription could be reintroduced in Sweden.