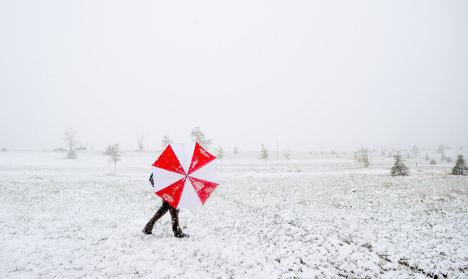 Temperatures are expected to hit -15C in northern Sweden. Photo: TT
The snow has already started falling in southern Norrland and is expected to spread along the coast.
The wild weather has prompted Sweden's weather agency SMHI to issue a warning in 25 separate areas across central and eastern regions of the country – and in the Baltic sea off Sweden's east coast.
"It all depends on how wet the snow will be," meteorologist Sandra Andersson from Weatherpal told the Dagens Nyheter newspaper.
She added that the temperatures were keeping mild and that the sea temperatures were relatively warm.
"But there could absolutely be ice on the roads."
SMHI has warned of rising water temperatures, treacherous road conditions, and gale force winds.
Northern Sweden can expect temperatures to hover around -15C. SMHI has warned Swedes to be cautious on the roads. Photo: TT
Those in southern Sweden can take comfort in the fact that the big chill is still not on the radar, with the mercury expected to swing between 2C and 10C this week.
SMHI had predicted snow for Stockholm by Thursday, but revised its forecast on Tuesday to just rain and clouds.
Sweden's three biggest cities, Stockholm, Gothenburg, and Malmö, all avoided weather warnings from SMHI.
Meanwhile, the daylight hours are continuing to decrease, with the sun setting in Stockholm at 3.47pm on Tuesday. Sunrises are getting later too, with Wednesday's forecast for 7.16am.