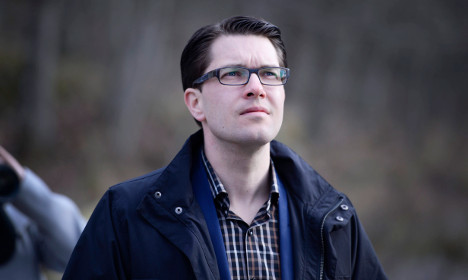 Åkesson has been off sick since October. Photo: TT
Åkesson, the 35-year-old head of Sweden's third biggest party, announced in mid-October that he was taking sick leave from his job.
"Now the election is over and things have settled a bit, I've noticed that things don't feel as right as they should after a success like this," he wrote in an open letter at the time.
Åkesson initially said he would return to politics by December, but the forecast changed on Wednesday when the Aftonbladet newspaper reported that a return before 2015 was "unlikely".
"The thing with this kind of illness is that you can't really say for sure how long it will take to recover," Henrik Vinge, spokesman for the Sweden Democrats, confirmed The Local.
"The formal leave is until the end of November but we can't be sure. It could be until next year, could even be longer."
How the Sweden Democrats went mainstream

Sweden Democrat Jimmie Åkesson. Photo: TT
Vinge added that the party members are on hand in case Åkesson wants to be in contact, but that he has been lying very low of late.
"We have established a way of handling the everyday work and taking care of business, we will continue with that until Jimmie is back. Of course, we have to work hard and try to cover for him, but we will cope."
Åkesson said in November that a long election campaign had taken its toll. The September elections saw the Sweden Democrats winning 12.9 percent of the votes.
The party leader said last month that despite the success, his subsequent chronic fatigue had to be addressed before he stepped back inside the Riksdag.
"I also have a responsibility for myself and not least my family. Being a good Dad demands a physical and emotional presence. This is important for me to keep going in the long term in this role," he added
Parliamentary group leader Mattias Karlsson has been serving as leader until Åkesson returns.