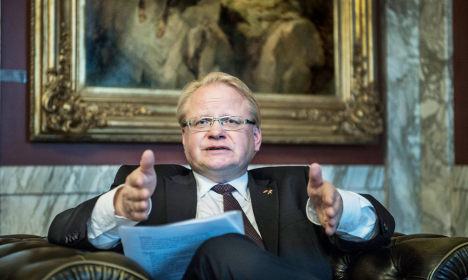 Defence Minister Peter Hultqvist. Photo: TT
Defence Minister Peter Hultqvist has only been in his job for a month, but has already made headlines for mulling Sweden's return to conscription – a system that was scrapped in four years ago.
On Thursday, the Expressen newspaper's leading political columnist KG Bergström took serious aim at the minister's colourful military past.
"Hultqvist, to me, is one of the Social Democrats most defence-friendly defence ministers ever," he wrote.
But he warned readers not to fooled by appearances, revealing that the minister was previously a conscientious objector, dropping out of his own conscription service in the late seventies.
The column explains how Hultqvist, apparently unhappy with being given chores during his own military service, organized a strike.
He ended up dropping out after 57 days in service.
"Conscientious objection is, of course, totally legitimate," Bergström continued. "But hardly the kind of merit for the country's top defence politician."
Hultqvist refused to comment when reached by Expressen.