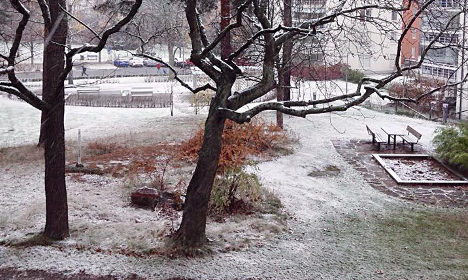 Much of Sweden's southern reaches experienced the first snow of the season on Thursday, including Stockholm.

Forecasters have suggested that up to five centimetres of snow could fall later in the day in several parts of southern Sweden, although the weekend is expected to be mild.

But it wasn't without problems, with the national weather agency SMHI warning those on the road to take caution.

Over 100 accidents have already occurred, reported the Expressen newspaper.

Many Stockholmers turned to social media to share their excitement about the season's first snow.

Earlier this week Sweden's weather agency SMHI issued weather warnings in 25 separate areas across central and eastern regions of the country – and in the Baltic Sea off Sweden's east coast.

But according to the Swedish Meteorological and Hydrological Institute it will be bright and sunny in Kiruna and Luleå on Thursday with temperatures of around -10C.