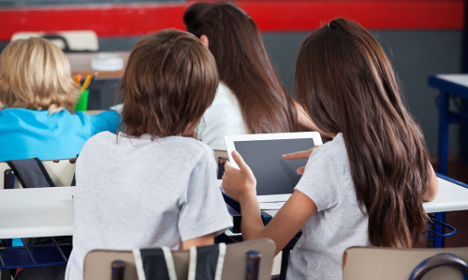 School results are slipping in Sweden. Photo: TT
The four parties that make up the Alliance, which governed Sweden until last month, announced on Thursday that they wanted the country to reclaim a place in the top ten countries in the world for school results.
Sweden has tumbled in the international Pisa rankings in recent years and came 38th in the most recent survey.
The Social Democrat-Green coalition has already promised to spend an extra 3.5 billion kronor on education. But the Alliance thinks Sweden should allocate 4 billion kronor to education.
"It will require great determination and tenacity to lift school performance," said Jan Björklund, who leads the Liberal Party and was previously Sweden's Education Minister.
His party is part of the Alliance, alongside the Moderates, the Centre Party and the Christian Democrats. Liberal Party leader Jan Björklund spoke at a press conference on Thursday. Photo: TT
Sweden's Social Democrat-Greem coalition government presented its budget last month but it still hasn't been agreed on by parliament. A vote is expected in December.
In the meantime, the Alliance is presenting a rival budget with a closer focus on education. It wants to introduce earlier testing for school pupils and smaller class sizes.
If the Alliance's budget wins the support of the nationalist Sweden Democrats it will defeat the government budget proposal from Prime Minister Stefan Löfven's minority coalition.
The government's budget has been criticised on the right for proposing larger tax increases than promised in the Social Democrats' election manifesto.
The Alliance says it will not actively court the Sweden Democrats, who in turn say they will support the budget proposition that best serves the interests of their voters. They have said that this could lead to them voting for the Alliance budget.
If the Alliance budget wins parliament's support it could lead to the government's resignation and possible fresh elections.
Many political commentators say it's unlikely the government will defeated. They point to the fact that Sweden Democrat leader Jimmie Åkesson is on sick leave as evidence that it would not currently be in the party's interests to risk new elections.
The Sweden Democrats pulled in 12.9 percent of the votes in the September elections.