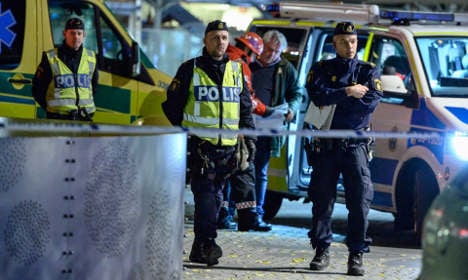 Police and Sweden's Security Service were called to the scene. Photo: TT
Officers in the Swedish capital say that they have detained the man on suspicion of having placed the explosives that were found in a shopping mall in Liljeholmen in southern Stockholm on Wednesday night.
He was arrested in the suburb of Hägersten on Friday afternoon.
Nothing exploded and nobody was hurt as as a result of the suspected bomb planting.
According to the Dagens Nyheter newspaper, police have not ruled out the possibility that the bomb was part of a terror plot, but say that they do not believe people in the area are presently in any danger.
The man was arrested after DNA evidence was collected from the scene along with what the Expressen newspaper described as "highly interesting documentation".
The report says that Sweden's Security Service, Säpo, is also involved in the investigation. Police on the scene in Liljeholmen. Photo: TT