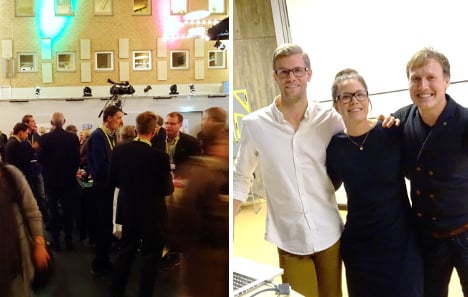 Some scenes from the 2014 edition of Vecka45. Photos: East Sweden

Despite the early winter chill, hundreds of people flocked to Linköping in eastern Sweden on Monday morning this week. Crowds gathered outside an angular black building in Mjärdevi Science Park, shaped distinctively like a wedge. And inside the trademark plain pine walls of the Dataton building the atmosphere was electric.

Originally inspired by Almedalen, Sweden’s infamous political pow-wow that takes place every summer on the island of Gotland, Vecka45 has quickly evolved into a unique event unparalleled by anything else in the country.

And each year it draws the region of East Sweden into a fantastic frenzy of innovation and inspiration.

“There are other ‘innovation week’ events, but none so encompassing as Vecka45,” project leader Susanne Pettersson of Linköping University told The Local. “I believe this is the largest such event in Sweden – and we’re doing pretty well on the European scale, too. It’s a very unique event.”

The first Vecka45 gathering took place in 2010, hosted by East Sweden Region, which includes the cities of Linköping and Norrköping.

The two towns serve as the primary nodes in a region brimming with research and innovation, and up until then, companies had hosted their own events spread throughout the year. But the pioneering Vecka45 approach sought to gather all the stakeholders together into one single, larger event, bringing benefits to all involved.

“Vecka45 is a meeting place for people with ideas and the people who can help to make those ideas a reality,” Pettersson added.

And in just five years, Vecka45 programme has undergone a massive expansion, jumping from just 40 activities in 2010 to 80 this year, and now attracting more than 6,000 participants.

“Vekca45 is a very important meeting place for our region,” Pettersson explained. “It features everything from contests to inspirational lectures. Everyone who is interested or curious about innovation and entrepreneurship can uncover a hidden gem here.”

And it’s no coincidence that the one-of-a-kind event takes place in East Sweden.

The region's wealth of science parks and cutting-edge research, along with its close ties to academia and local industry, means it's a powerhouse for entrepreneurship.

“We have one of the best innovation support systems in the world,” Tomas Ahlström, Senior Business Developer at Linköping University told The Local.

“As an entrepreneur here, you are never alone. You can get help with everything from basic advice to financing,” added Ahlström, who’s been involved with Vecka45 since its genesis.

This year, Vecka45 is bigger and better than ever – and more international. The theme is “Collaboration Without Borders”, and for the first time ever, multiple events were held in English.

The week kicked off on Monday with a powerful rendition of a Jimi Hendrix song, followed by a lecture by Teo Härén, an expert on creativity who travels the world speaking about innovation. The question: Is Sweden the most creative country in the world?

The answer: “Yes and no,” Härén declared. “It depends on how you define creativity.”

Härén explained that Sweden is indeed the most creative country as measured by patents per capita, but cautioned against sticking to any particular metric.

"I could also argue that Zimbabwe was the world's most creative country, because people are forced every day to be creative just to get milk or gas," Härén said. "We have to be humble and realize that we can learn something from all nations."

The inauguration speech was a hit, eliciting laughs that echoed off the pine interior, as well as moments of that left the crowd pondering deep thoughts.

"I absolutely loved the setting," Härén raved. "It was one of the coolest stages I have ever stood on, and that is after 1,500 speeches in more than 20 countries."

It was just the beginning of an unforgettable week.

Härén’s words of wisdom were followed by an in-depth seminar and mingle about crowdfunding.

“Sweden is such a small country, and yet one of the most represented when it comes to crowdfunding sites like KickStarter,” Ahlström explained. “It’s very cool. But there are a lot of questions about it, so we thought it would be good to enlighten and inspire people about crowdfunding.”

The seminar began with a lecture by the Swedish “kings of crowdfunding,” FundedByMe. The company’s project managers spoke about how crowdfunding works, as well as examples of successful campaigns – many of which come straight from East Sweden.

“We’re talking about everything from a new burger restaurant to organic-certified vodka and IT projects,” Ahlström remarked. “And then of course there’s Narrative, the little camera you can wear on your shirt.”

Narrative, which made headlines across the globe and has been hailed in media as the next big thing, had its humble origins in Linköping, starting with a crowdfunding campaign.

After the event, participants had the opportunity to speak one-on-one with one of the speakers.

“People got to book the experts for a private session to show off their exciting, top-secret inventions,” Ahlström laughed. “It went from inspiration to fact to expert advice.”

Ahlström was also a key organizer of LiU (Linköping University) Game Awards, where a jury of prominent gaming industry professionals judged the entries of 120 students who have designed their own games. The winner was Spacecraft:

One of the most popular events of the week was the Venture Arena and mingle – sort of like investor speed-dating.

“We picked 28 early-stage ideas, business prospects, who presented their concepts,” Ahlström said. “And in the audience we had 299 businessmen, board members, and investors who sat and listened for a good match.”

Other highlights of the week included Tuesday’s talk with Smiling Cashew – a remarkable little company blessing tastebuds in Sweden while paying farmers in Gambia.

”It was a wonderful experience, and a very well-organized events,” Joakim Söderling, one of the company’s four founders, told The Local. “It was exciting to talk for the student audience; they’re the future of the business world.”

Smiling Cashew was born when the four friends, who met as students, went to Gambia to write their thesis.

“And it became clear that [local Gambians] didn’t agree at all that aid helped development. They said it made them lazy. What they really wanted was jobs, and the opportunity to contribute something themselves.”

So the friends decided to turn things around, and asked how Sweden could benefit from Gambia. The solution was cashews – and sustainable income for the Gambians.

"We don't sell nuts," Söderling said at the lecture on Tuesday. "We sell development."

Wednesday was a particularly interesting day for international audiences, with both a full-day workshop in English about the value of science parks, and a shorter seminar specifically targeted at immigrants who want to start businesses.

”The value of science parks” #vecka45 : Why public money in Science Parks? "To create huge possibilities for growth!” @christiangu #mjardevi

Eva-Marie Tornström, organizer of the event, said that it was critical that it took place in English due to the international audience.

"We had participants from not only Sweden but also Brazil, the UK, and Spain," Tornström told The Local. "Science Parks are actors on a global arena, and this Linköping Declaration about science parks will have a global use."

The event targeted at immigrants took place in Swedish – but that was the whole point.

“For a while we’ve had a course about starting your own company, for those with knowledge of Swedish but who need help with the jargon,” Anna Hofstedt of event organizer of the startup seminar, hosted by NyföretagarCentrum, told The Local.

Hofstedt clarified that the course was not about learning how to be an entrepreneur, but more about learning the terminology and how the Swedish system works.

“We talked about the VAT ‘moms’ tax, words like likviditetsbudget, et cetera,” Hofstedt said. “There were a lot of people from Syria and Somalia who had run companies in their own countries, but needed help in Sweden. It was much appreciated.”

Pettersson explained that the international audience of Vecka45 is growing, and the event is adapting and expanding to meet the new demand from non-Swedes.

"What I'd like you to do is break some rules", says Paul Birmingham @ARRISEVERYWHERE about Swedish wellbehaving people #vecka45 #franzjäger

“In the future we will reach out to these people even more. I absolutely believe that it’s a very important demographic.”

“Collaboration is a prerequisite for growth.”

The theme, which was woven throughout events during the week, culminated in a large mingle event on Thursday, Mingle Without Borders.

Do you talk about change or do you make change? Paul Bermingham CEO at @Arris asks the audience at #mingelutangränser #vecka45 #change

And Vecka45 went out with a bang on Friday, with Israel's Deputy Ambassador in Sweden, Uri Rothman, traveling to Linköping for a seminar comparing the innovation systems in Israel and Sweden.

Heading into the weekend, Pettersson was pleased with this year’s edition of Vekca45.

”The atmosphere was just incredible,” she said. “Great lectures, fantastic locations, and so much inspiration.”

Härén agreed, promising he’d be back for next year’s event.  Indeed, with each year, Vecka45 continues to expand. According to Ahlström, it’s the unique community feel of the East Sweden region that draws people back year after year.

“We have a very unique position here with Vecka45,” Ahlström remarked. “It’s quite unique that all of the key players within the innovative system are as close together as we are here.  We meet, talk, and discuss how we can really support each other.”

Or as the region itself so simply explains it:

"We’re not so picky about the map of our region. Why not? Well, because we live in a globalized world where curiosity, knowledge, and innovation move borders. Just like in East Sweden." This article was produced by The Local and presented by East Sweden.