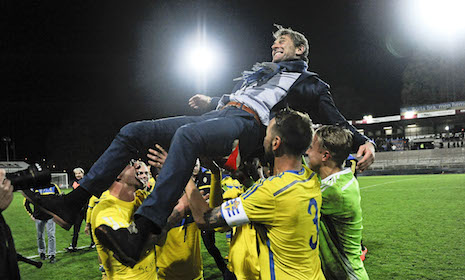 Sweden's Under-21 team lift their coach Håkan Ericson after a win against France. Photo: TT

The tournament will be hosted by the Czech Republic on June 17th – 30th with the Group B games played in the eastern Czech cities of Olomouc and Uherske Hradiste.

The four semi-finalists of the tournament will clinch a spot at the 2016 Olympics.

Sweden faces tough competition. Italy is the most successful nation in the history of the competition, with five Championships won.

In the other group, played in Prague, the Czech Republic will face Germany, Denmark and Serbia.

Spain, who won the last two tournaments in 2011 and 2013, did not make it to the finals after being knocked out by Serbia in the play-off stage of qualifying.

If England, which cannot play at the Olympics (where Great Britain is represented) makes it to the semi-finals, the teams that finish third in their groups will face a play-off for a ticket to Rio.