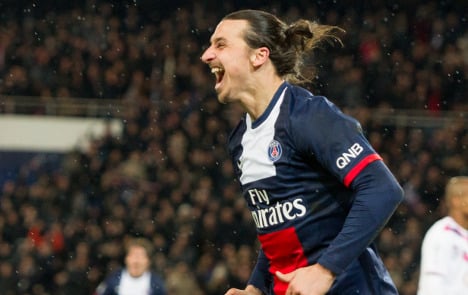 Photo: TT
The Sweden captain took part in training for the first time since injuring his heel on September 21 and his return is a huge boost for Laurent Blanc's champions, who come into the high-security clash at the Parc des Princes, four points back of their arch rivals.
The club published several photos of last season's Ligue 1 top scorer in training with the headline – "Encouraging signs ahead of the clasico".
Ibrahimovic, who scored 41 goals in all competitions last season, trained with the ball for the first time on Thursday and later spoke on the club's tv channel about his motivation to make his return against Marseille, arguably the biggest fixture in French football.
Top ten quotes from Zlatan Ibrahimovic
"This type of match, you have to win. I've played in a lot of derbies in my career, in Holland, Italy, in Spain so I have the experience in these situations," continued the former Ajax, Juventus, AC Milan and Barcelona star.
His Brazilian teammate Lucas fuelled the rumours about a potential return when he spoke to AFP and revealed the Swede's initial form.
"I saw him yesterday on the training ground and he was running very well. He said he was feeling a bit of pain but he's doing really well and is running normally. I hope he will be ready Sunday because we've missed him and he's a great player," said Lucas.