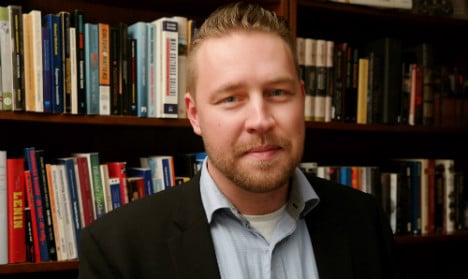 Mattias Karlsson, who was Åkesson's deputy until the party leader went on sick leave citing exhaustion, told Dagens Nyheter that his political colleague had been finding it difficult to cope for several years.

"I've been aware that he has been on the verge of breaking-point psychologically for some time. I don't want to go into details but I've seen the warning signs for at least four years," said Karlsson.

Matters reached a head during Åkesson's last major public appearance during the party leaders debate in the Swedish parliament. Karlsson said he spoke on the phone with his fellow Sweden Democrat, just prior to his decision to go on sick leave for the rest of 2014.

In October Åkesson stunned the political establishment by announcing he was going on sick leave due to exhaustion. A doctor diagnosed him with chronic fatigue and he has since shelved any plans to return to the Riksdag until at least 2015.

He claimed that the long election campaign, in which the Sweden Democrats claimed 12.9 percent of the vote, had sapped him emotionally and physically.

Karlsson has stepped into Åkesson's shoes and conceded in the lengthy interview that he was prepared to become the permanent leader of the party.

"I got involved to make a difference. This means that I have a loyalty towards the party and if other people think it's the best thing of the party that I become leader then I guess I'll have to think about it." Karlsson is known as the 'chief ideologist' of the nationalist party, having shaped much of its policies and public statements over the last decade.

ANALYSIS: Why nobody cares if a Swedish leader is off sick

However, he claims to detest the title saying that it sounds like something associated with the notorious Nazi minister of propaganda Joseph Goebbels.

"I hate that term chief ideologist, it sounds like something from Goebbels. But it is true that it has been my role to work with the program and develop the ideas."

The Parliamentary Group leader said he still speaks with Åkesson on a regular basis but wants to give him space in order to make a full recovery.

"Ideally I would like to ring him five times a day but he needs breathing space."

In September's general election the Sweden Democrats claimed almost 800,000 votes, establishing themselves as the third largest party in the country.