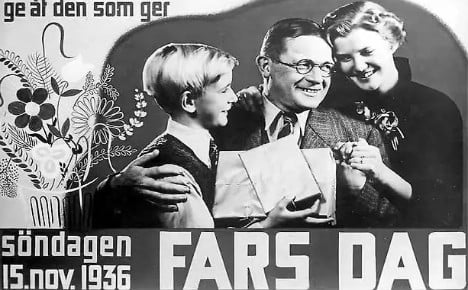 A Swedish advert promoting Father's Day from 1936. Photo: TT Archive
The annual celebration of Father's Day (Fars Dag) falls today (November 9th) and is a staple of the Swedish calendar. It's believed that Swedes imported the custom from America way back in 1931, some 12 years after Mother's Day had begun.
Initially Father's Day was celebrated in June, as it still is in the UK and USA, but following pressure from businesses it was shifted to November.
The reasons for the move were simple; it was too close to Mother's Day, traditionally held in May, and it was to give the quiet month of November a boost in trade.
In a 2012 survey carried out by HUI Research indicated that two thirds of Swedes participated in the occasion. Out of the 1000 people surveyed it was estimated that an average 281 kronor ($38) was spent on a present for Father's Day.
A third replied they gave no gift at all.
An ethnologist at the Nordic museum in Stockholm told the Helsingborg Dagbladet newspaper that making a fuss over mother's and father's day peaked during the 50s and 60s.
"It is a bit surprising that the tradition still exists. You would think that with the debate and everything else in recent years that these days it would be questioned. They certainly don't belong to our major festival days but they are still there," Jonas Egman told the newspaper.
Egman added that there is still more fanfare over Mother's Day in part due to how the occasion was marketed back in its earliest days.
"It has to do with the image of the mother (back then) was so central to keeping the family together. In the 1900s the image of the man was that he was the provider and the mother kept things together."
He said that the fact the occasion was still being celebrated in 2014 was evidence that nuclear families remain strong in Sweden.
Despite this the occasion is regularly criticised for being overly commercial. This hasn't resulted in a spike in sales according to the boss of the Helsingborg branch of the Olséns menswear stores.
"It's not like it was before. Sales for Father's Day were at their best in the 70s and 80s," Bo Hedin told Helsingborgs Dagbladet.
He stated that sales of ties as a present didn't go through the roof in November.
In the 2012 survey the usual presents were to invite your father out for dinner or give him a book or some chocolate. That concurred with the type of gifts that father's wanted which were dinner, books and wine.
A quarter of the fathers surveyed said they didn't want any present at all.
The founder of Father's Day is believed to be an American woman called Sonora Smart Dodd, who died in 1978 aged 96, who suggested the occasion to honour her own father back in 1910. 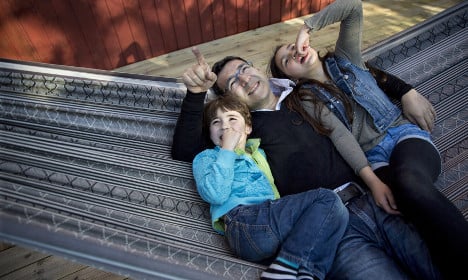 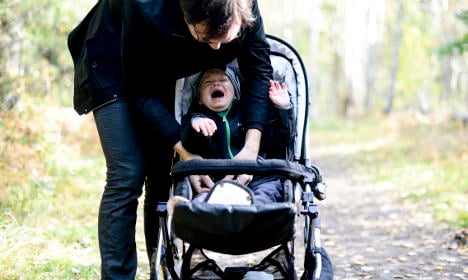 PARENTAL LEAVE
Parental leave bonus to be scrapped in 2017
Url copied to clipboard!