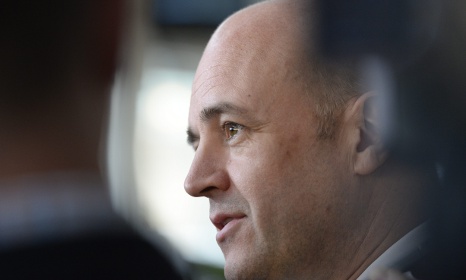 Fredrik Reinfeldt appeared in London on Monday. Photo: TT
The Moderate Party leader has kept a low profile since he was ousted as Prime Minister in September's election with Anna Kinberg Batra taking over day-to-day parliamentary business.
But Fredrik Reinfeldt broke his silence in a speech at the Confederation of British Industry’s (CBI) annual conference in London, where his long-time ally, British Prime Minister David Cameron was also appearing.
Reinfeldt focused on what he believes Europe needs to do in order to remain competitive.
He said that countries needed to work more closely together in order to remain prepared for future financial crises, which he added can "spread very quickly across borders".

Fredrik Reinfeldt giving his keynote address to a full house at #CBI2014 pic.twitter.com/Yi2SHuGpIz

Speaking without notes, Reinfeldt also talked about the importance of creating jobs and cited Sweden as an example of a European country that had managed to quickly reduce its debt levels following the global financial crisis in 2008.

The last time Fredrik Reinfeldt made an international appearance was in September, when he met with US President Barak Obama and spoke at a UN climate summit in New York.
He intends to formally step down as Moderate Party leader next year but has yet to reveal what he intends to do next.
Swedish newspaper Dagens Nyheter recently suggested he was being considered as a successor to United Nations Secretary General Ban-Ki Moon in 2016.