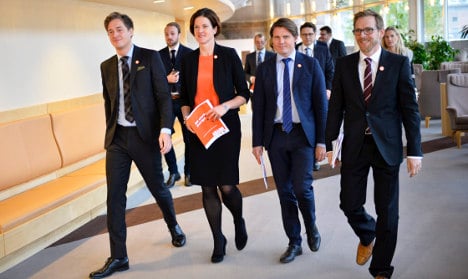 Senior Alliance politicians presented their budget on Monday. Photo: TT
The parties said that they would spend a total of 10 billion kronor ($1.4 billion) – much less than the government's 25.5 billion kronor budget announced last month.
This would include putting money towards school tests for pupils in their fourth year, increasing the number of maths lessons taken by high school students and expanding the number of years that pupils spend at school to ten.
They would also build 300,000 new homes by 2020 and simplify the rules for entrepreneurs to get into business in Sweden.
The Alliance, which governed Sweden for eight years until the general election in September 2014, consists of the Moderate Party, the Liberal Party (Folkpartiet), the Christian Democrats, and the Centre Party.
In Sweden it is common for opposition parties to suggest an alternative budget following an election, which is then voted on by the Swedish parliament.
Usually the budget put forward by the government gets selected. But this year there has been a lot of speculation that the Sweden Democrats, the nationalist party that is the third largest in the country could choose the Alliance's proposal when voting takes place on December 3rd.
This would mean that the Alliance's budget would have more support than the government's budget plan, a scenario which could trigger fresh elections in Sweden. Sweden Democrat head Jimmie Åkesson. Photo: TT
Liberal Party spokesman Erik Ullenhag said on Monday that the Alliance's budget was not created with the Sweden Democrats in mind.
"We're moving forward with the policies that we believe are best for Sweden," he told the TT news agency.
"As we're serious about not giving the Sweden Democrats any influence, we're not adapting our policies to the party," he said.
Meanwhile Sweden's former Prime Minister and outgoing Moderate Party leader Fredrik Reinfeldt has said that Sweden is in trouble if the new government's budget is not passed.
Speaking to news network Bloomberg in London he said:
“If the government loses the budget then you have a real crisis of course”.
The Alliance parties could withdraw their budget proposal or abstain from voting for it in order to help the country’s new Social Democrat-led minority government get its budget proposal through parliament.
But Reinfeldt suggested that was not going to happen.
“In a democracy you need a government and an opposition," he said.

Political Scientist Li Bennich Björkman from Uppsala University told The Local recently that any talk of the Sweden Democrats voting for the Alliance's budget is just the party's way of looking for attention.

"They want to show that they're a party to be reckoned with, it's like a psychological game," she said.

While she was cautious to predict whether the Sweden Democrats would actually vote against the budget, she said it would be unlikely they would be keen on a new election – especially considering party leader Jimmie Åkesson is sidelined with exhaustion until further notice.

The Sweden Democrats will also present their own budget on Monday, although no other parties are likely back the nationalists' financial plans.