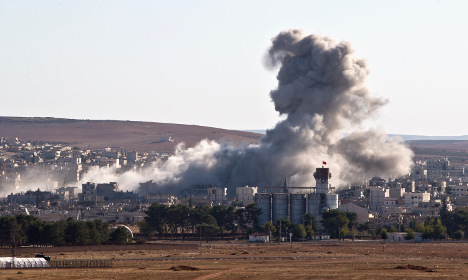 Images from an air strike attack on Sunday in Kobane. Photo: TT
Two of the Swedes, who came from Gothenburg and Stockholm, were killed in the town of Kobane during an American air strike on Sunday, reported the Expressen newspaper.
One of the men was killed while on guard and died instantly, another Swedish Isis fighter told the paper.
"The Stockholmer was on the front line in Kobane and was standing on guard," he said.
"An American attack plane bombed the other brothers close by him. He hurried over to help them and was bombed himself."
The Gothenburg man died in the same attack.
A third man who was also from Gothenburg died on Sunday, but from injuries sustained during another attack.
Sweden's foreign ministry is yet to confirm the information.
"This is a tricky area and it's not even certain that we'll get any official information. But it's only then that we can confirm anything," Victoria Bell at the ministry told the TT news agency.
Expressen reported that all three men were of Somali origin, and added that between six and seven Swedes head to Syria each week to fight for Isis.
The town of Kobane, also known as Ayn Arab, has been under assault by Isis extremists since mid-September and is being defended by Kurdish fighters.