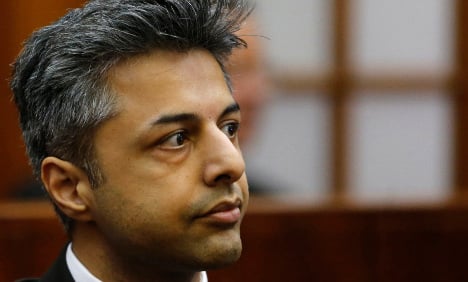 Dewani in a Cape Town court. Photo: TT
Dewani's sex life has been a focus of his trial for her murder, with the prosecution arguing that he is gay and hired hitmen to kill her because wanted to get out of a marriage he felt forced into by family pressures.
"I left my home, family and everything to be with you and three days later you say that if you knew marriages were like this, you wouldn't have got married," one email said.
"I don't want an insecure man or a man whose feelings doesn't come naturally that you have to force yourself," Anni Dewani, 28, wrote on November 5th, 2010.
The emails from her smartphone, which were read to the Cape Town High Court by investigating officer Captain Paul Hendrikse, went unanswered, he said.
Days later, on November 13th, she was dead.
Dewani, 34, says he and Anni were hijacked while on honeymoon in South Africa by armed men who forced him out of the vehicle before driving off and shooting her.
The driver of the hijacked taxi and one of the hijackers — both serving long jail terms for Anni's murder — have testified that Dewani hired them for 15,000 rand ($1,300) to stage a hijacking and kill his wife.
The Dewanis, both from wealthy families of Indian origin, were married in a lavish ceremony in Mumbai.
"Because we had a Bollywood wedding, it doesn't mean we are Bollywood actors and just pretend everything is good when it isn't," Anni said in her email.
"It will just end up with us hating each other."
Dewani has admitted being a member of gay websites and having paid male prostitutes for sex, but says he is bisexual and loved Anni.
The court has heard the businessman described himself on the Gaydar website as "gay," not "bisexual," and that he had logged onto the site within hours of Anni's death.
He returned to Britain days after her murder, and fought a three-year legal battle to avoid being extradited to South Africa, claiming he had mental health problems, including depression and post-traumatic stress.
But he was sent back to South Africa, where his trial began on October 6th and is expected to end early next month.