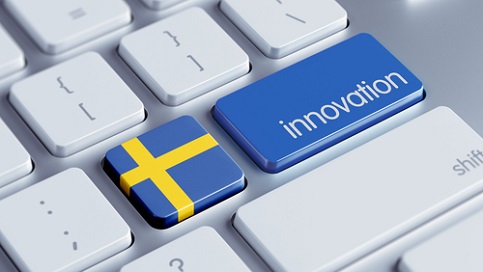 Trailblazing tech companies from Ericsson to Spotify and Skype have already rocketed out of this ice-covered country to become global powerhouses that have helped redefine the very way we listen to music and communicate with each other.

According to Creandum, one of the most-active venture capitalists in the region, Nordic tech exits have generated EUR2.6bn (USD3.3bn) on average per year over the past five years. And more than half of it's coming from Sweden, a country with less than 10 million people.

Here, we take a look at 10 of the most significant recently-funded tech companies to emerge from this Nordic hotbed of entrepreneurs and ask them what it is about this region that's producing such clear-sighted and successful tech businesses.

Tictail describes itself as 'an e-commerce platform for people that don't like e-commerce' – or, perhaps, people who don't understand e-commerce.

The company now has 60,000 indie retailers and boutiques using its service, but CEO and co-founder Carl Waldekranz tells StrategyEye it’s still only addressing a “fragment” of the available market.  With Instagram and Twitch-investor Thrive Capital coming on board alongside Spotify-backer Creandum in its USD8m round in February, the company is well-positioned to continue its growth.

When asked how big the potential is for bringing micro businesses online, Waldecranz says there are a lot of ways to cut into the space.

More than just bringing businesses online, Tictail says the bigger opportunity lies in making them succeed – that includes offering everything from transactions to ad buying to startup loans. There’s a lot of noise in e-commerce right now and Waldecranz says there’s bound to be overlap, but that Tictail is built to grow with its customers.

So what is it about Sweden that’s producing such clear-thinking startups?

“Swedes are not afraid of trying things out, confronting our boss with a bold new idea, or challenging the established dogma,” says Waldecranz.

“The Swedish scene is awesome, but that's not new. People are very focused and spend less time at conferences and more time building. There might be less startups than in other cities like Berlin, but there are more successful ones.”

Truecaller aims to be the global answer to the old fashioned phone directory, meets Google, meets your phonebook. Users can search for businesses as well as manage personal contacts in the Truecaller community.

When a user’s number is requested, they are notified and can pick whether to approve the request or not. It also offers an identification layer to inform users who is calling before they call up and what kind of connection – be it landline, mobile or pre-paid – it’s coming through on. The community crowdsources reports on spammers so that users can block calls.

The firm is clearly touching a nerve, saying it's now doubled from 880m searches per month half a year ago to more than 1.5bn searches currently. The overall global community now stands at 85m, up from 20m in June, and growing at a rate of 200,000 users per day, according to a company spokesman.

Investors including Skype founder Niklas Zennström’s Atomico, plus Sequoia and Kleiner Perkins like it so much they slapped USD60m in funding on the company earlier this year. The participation of these high-profile Silicon Valley investment companies is testament not just to Truecaller’s potential, but to the growing seam of funding opening up between the US and promising European startups.

“The Swedish startup scene is extremely exciting and it’s definitely maturing,” a Truecaller spokesman tells StrategyEye. “We are starting to see a more developed eco-system where many successful companies like Spotify, Klarna and Mojang inspire the community.

The 3D-printing economy continues to gather steam as the concept starts to develop from theory to practical use.

While consumers can now get their hands on the hardware, Stockholm startup Volumental says getting the printing blueprints is still quite difficult.

Another Swedish company garnering attention from Silicon Valley investors, the firm recently picked up USD3m in funding for its cloud-based software, which lets users create accurate scans of human body parts using 3D depth cameras. In plain talk, this means people can scan their feet to create shoes customized perfectly to them.

It’s still relatively early days, with the firm demoing this in San Francisco in September and potentially bringing the service to market this year. But the potential is clearly big, with applications ranging from medicine to retail.

"There’s a lot of hype around 3D today, especially 3D printing," Volumental head of comms Anna Malkan tells StrategyEye. "To avoid getting caught in that, it’s always very important to focus on creating real value for the end users, and I see more and more companies doing that.

"The implications are enormous, from the democratizing the design process and making sure people never have to wear poorly fitting items, to more sustainable production methods and lower costs. The medical industry has already started adapting to the possibilities using 3D scanning and printing with great success, now it's time for the retail industry to follow!"

Magine is a cloud-based service that lets users watch TV whenever, wherever without needing a set-top box or cables. The firm doesn’t air any content that isn’t licensed and users can watch live programming, as well as browse a back catalogue of on-demand content.

Where US cable firms have succeeded in getting Aereo suspended, the likes of CNN, Nickelodeon, MTV, RTL and BBC Entertainment have inked deals with Magine. Online video continues to be a honeypot for investors as consumers increasingly shift their viewing habits from traditional TVs to cloud and online services and the firm picked up a hefty USD19m round last summer.

“However, as an independent TV service we do play a part in disrupting the existing distribution model where cable, satellite and terrestrial channels are increasingly being replaced by internet-based distribution that allows content to be viewed anywhere and at any time, rather than just at home.”

Along with government investment in subsidised personal computers and a solid broadband infrastructure, Hjelmstedt says another historical factor driving innovation in the region is the legacy of Swedish telco giant Ericsson as a key player in driving the global mobile revolution.

“Sweden's reputation as a greenfield for building international business has made the global tech and investor communities keep a close eye on the Stockholm startup scene. This has given the startup community great confidence and inspiration, as well as contributing to a sense of great respect from other parts of the business world.”

If the first stage of social media was about having the biggest user base, the second sees an eruption of niche communities of highly-engaged users springing up around particular verticals.

CEO Johan Attby tells us the firm focuses on helping its community catch bigger fish and brag about them. It might be a niche, but it’s a pretty big niche. In fact, Attby claims it’s the world’s biggest hobby.

More interesting, for Fishbrain, is the size of the retail market, which he says is worth USD45bn in the US.

“I'm super bullish about niche social networks,” says Attby. “When you go after a passionate group of people that spend a lot of time and money on their hobby, they are willing to pay for a premium experience.”

What’s it like to be working on a startup in Sweden right now?

“Stockholm is better than ever; I don't think there's been any better time to run a startup than now,” says Attby. “The ecosystem has really evolved in the last five years, and I think we've finally reached a critical mass.

“Sweden has a very strong background in tech, especially in mobile and design. These two combined are perfect for creating great companies. Before, the ambitious and smart students wanted to be management consultants if they had a business background, or work for Google if they had an engineering background: today they want to start a new company or join a startup. That's a huge change!”

Read about the next five start-ups in the full article at StrategyEye:

This list was written by and reproduced with the permission of StrategyEye. Click here for five more start-ups to watch.