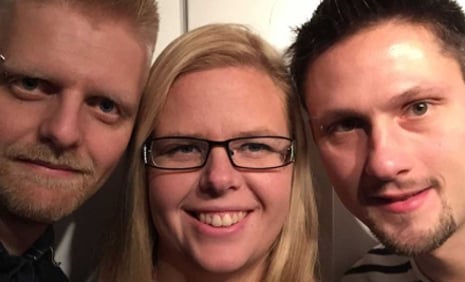 Hampus Engström (right) moved in with Erik and Linda Fridland. Photo: Private
Hampus Engström, 29, says that falling in love with a married couple was the last thing he expected when he met fellow taxi driver Erik Fridland through work.
But after hanging out with the 35-year-old and his wife Linda, 34, he started to develop strong feelings for the couple.
"I used to go round for dinner with them and I found I liked them both and we had so much in common. We could just speak about everything, right from the beginning," he tells The Local.
After an "uncomfortable" couple of months, he says he finally had a conversation with Linda when it became clear that she and her husband Erik both had feelings for him too.
"I didn't think you could love more than one person at a time before this," says Engström.

The three parents live together with their children in northern Sweden. Photo: Private
They all decided to move in together in January 2013 with Hampus bringing his daughter – now five – to join the couple's nine-year-old twin boys and their thirteen-year-old son.
The new family later launched their own taxi business in Strömsund in Jämtland in northern Sweden along with a store selling children's clothes.
"We work together and we live together. I sleep in the same bed as Linda and Erik. Yes, we have a sexual relationship. We all have sex together".
He says that the family decided to start blogging about their experiences to "show that there are other ways to live than those 'normal' relationships".
"We have children, a house, a car and jobs. It is not all about sex, we do all the mundane things too," he adds. The three parents sleep in the same bed. Photo: Private
Engström says the three adults were worried about the impact their decision could have on their children, but he insists that none of the kids have been bullied and says that some of their friends "think it is cool that they have two dads".
Polygamy – when a husband has more than one wife or vice versa – is illegal in Sweden, but there are no rules to stop groups of people living together.
Sweden's Centre Party previously lobbied for a change in legislation, while it was part of the previous centre-right coalition government, but dropped its support for polygamy following rifts within the party.
Engström says he is still hoping that the law will be adapted in future, to allow him to marry the Fridlands.
"It is currently tricky for us in certain situations. When you go to the bank they are usually looking for two signatures, there isn't space for three. Usually only two people get a mortgage so that was tricky for us but we managed to make it happen".
Engström says he knows of "several other polyfamilies" living together in Sweden and elsewhere in Europe thanks to a strong Facebook community and thinks that the phenomenon is becoming more common.
"I hope we will eventually be able to get married and that hotel staff won't find it so strange if three of us want to book a room and share a bed together."