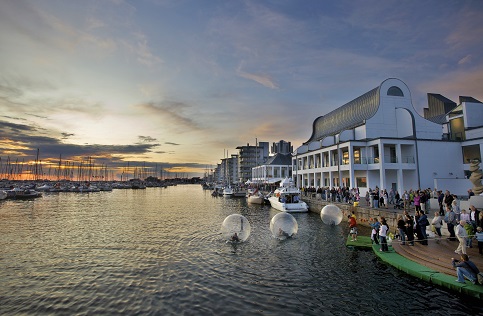 Under Danish rule for hundreds of years, Skåne has long had ties that reached far beyond Sweden’s borders. That legacy informs the region’s unique business environment, one that’s characterized by diversity and an eye toward the wider world.

While roughly 15 percent of Sweden's population is foreign-born, in Skåne that number is even higher: 16 percent in the province as a whole; and in Malmö, Skåne's largest municipality, 33 percent of residents were born abroad. The region is a magnet for international talent.

That unique mix of diverse competence, backgrounds, and perspective is part of why Skåne aims to be the most innovative region in Europe. And according to a recent OECD report, Malmö already ranks as the fourth most innovative city in the world.

So, what’s the secret to having your career take off in Skåne? The Local catches up with six people who offered up their own tips for getting ahead in south Sweden. Yong Joong Lee and his son on a blustery day in Skåne. Photo: Private

Skåne doesn’t just boast a unique history – it also has its own dialect. And if you really want to shine, you’ve got to learn it.

“Before focusing on one's own career, it should be a priority to be integrated to the local culture of Skåne by being able to speak the language,” South Korean Yong Joong Lee tells The Local.

Of course, knowing the language isn’t a prerequisite for getting a job – but it will certainly help, Lee says.

Lee moved to Skåne in 2011, and works at the new European Spallation Source as a group leader in the Target Division.

But he already had a good impression of the place.

“I had previously worked at the Swedish-Swiss company ABB in Switzerland with several Swedish colleagues,” Lee explains. “Swedes are comfortable people to work with, and in Skåne that first impression has not been changed.”

Best of all is the peaceful environment, he said – both on the job and off.

“People in Skåne look for a harmony and a modesty in working relations, and I have witnessed much less personal conflicts among the colleagues at work here compared to my previous working places.”

Skåne is also a great place for kids, with plenty of open space and children-friendly environments.

“There's room for self-reflection, and there are ethics and clearly defined values in society.” With such a broad international population, Skåne is overflowing with networks. Your task is to leap into them.

That’s what worked for Sonia Prado Perez, who hails from Spain and Switzerland.

“It really is the most important thing,” Prado tells The Local. “Swedes hire a lot through their networks, so you need someone to open the door when approaching them for the first time.”

Prado moved to Malmö three years ago, and was frustrated at first by going from “active woman to desperate housewife”.

“I had a hard time finding a job at first,” Prado recalls. “I started building a network through Rotary, where I am still a member, and joined a marketing network called MiM. I learned that it’s much harder to find a job if no one in Sweden can recommend you.”

Prado said there are plenty of options – networks related to a profession, women’s networks, expat networks, and more. The important thing is to establish yourself. Not in Skåne quite yet? Scope out a network or two in advance.

Eventually Prado’s network pushed and supported her to create her own opportunities, and today Prado runs her own business as an event coordinator and wedding planner.

“Events Without Barriers aims to help companies which want to expand with events in France, Switzerland, Spain, and Italy,” Prado explains. “Those countries are not as good at English, and since I speak fluently, I am their link.” All work and no play makes Jack a dull boy – even in Skåne.

Leo De Rosa, an Italian telecoms engineer, was determined to be no Jack.

De Rosa is married to a Swede, but the couple lived abroad for several years.

“I always regarded Sweden, and the Lund area in particular, as innovative and technologically advanced,” De Rosa tells The Local. “So when the right job opportunity materialized, we moved to Malmö.”

Since moving to Skåne, the family has achieved a better balance between work life and private life, the Italian says. The business culture was far superior as well, he adds.

“First I would mention the openness, transparency, and respect for foreign people,” De Rosa explains.

“Secondly, the strong sense of teamwork here in Sweden. I am convinced that this consensus approach does pay back in the long run.”

De Rosa also says that the proximity of Skåne to Denmark, and thus the entire European continent, makes it an ideal region for an international workforce.

“I think that any well-educated, open minded individual can find his or her way in this region’s business life,” De Rosa says.

But if you really want to shine? Play ball.

“My paramount advice is to take the opportunity to start playing golf,” De Rosa says.

Genuinely connecting with other people is critical to successful business integration – both on and off the job.

“Skåne alone offers around 80 golf courses, many along the coasts. Golf is an excellent way to learn the territory, and it also gives you plenty of time for connecting and socializing with other interesting people.” Amy Johansson, an American woman who worked with PR in New York for 12 years, moved to Växjö with her Swedish husband in 2011.

“That's where my husband is from, but we immediately got growing pains there,” Johansson tells the Local. “After living near the coast and in cities all my life, it was just not good for us.”

“Skåne, with its continental access, three coastlines, and charming and beautiful meadows, just beckoned brightly at us,” Johansson explains.

She also appreciated the people.

“There is something quirky and fun about people from Skåne that just appeals to me. They are the Texans of Sweden,” Johansson says.

Today the family lives in Helsingborg, a “random choice” which happened to be perfect.

Johansson studied technical writing in Malmö before interning at two different companies in the region. Finally, she opted to start her own business, and now runs her own PR firm, IRL Media.

“Take advantage of the amazing position of the Öresund region,” Johansson says. “You are very close to Denmark and the continent and have the advantage of being able to leverage this, work-wise.”

Trust is key – and respect your lunch Irishman Conor Clifford, Technology and Innovation Strategy Manager at E.ON, moved to Skåne from the UK three years ago.

Originally planning to stay two years, Clifford just kept extending his time here, and now he plans to stay until 2016.

E.ON is one of many international companies with operations in Skåne, and since he transferred through the company, Clifford of course had no trouble finding work. But he said the business culture took some getting used to.

“The working atmosphere in Sweden is generally more relaxed, open, and flexible than in the UK,” Clifford told The Local. “In Sweden there is a stronger work-life balance ethic.”

And it’s not just about evenings and weekends.

“Lunchtime is taken very seriously. People really do take a break to get away from the desk and sit together. No sandwiches in one hand while scanning emails with the other.”

The work-life balance has also been the most rewarding part of Clifford’s experience in Skåne.

“I was able to break out of the old working habits I had in the UK, with very long days and working at home,” Clifford explained. “I gained balance myself. It took time, but it happened.”

Clifford said that his key advice for others wanting to work in the region was simple: build a foundation of trust.

“This may sound strange, but I think that in Sweden, compared to the UK, people place more weight on the belief and trust in people than rather than in processes. Having already gained someone’s trust or respect here is very important, and brings down a lot of barriers.”

Hop on the bandwagon

Denmark and Sweden observe a rivalry dating back to the Viking era. But for Michael Sejrbo-Petersen – a Dane – there was no contest.

Sejrbo-Petersen spent much of his childhood in Sweden, but considers himself Danish and holds a Danish passport. But he couldn’t resist Skåne.

“I studied marketing management in Denmark and lived in my home country for three and a half years,” Sejrbo-Petersen explains. “But then I headed back to Sweden again – the country which I truly adore most in the Nordic region.”

At first drawn simply by the “extraordinarily good geographical position” of the Helsingborg area, Sejrbo-Petersen soon found himself frustrated by his lack of the right “key to the entrepreneur door”.

He had an idea he believed in – Dirma.se, transparent marketing which pays consumers, launching this autumn – but he struggled at first to make it a reality.

That’s when he stumbled upon Forza of Sweden – an incubator of sorts, or rather an “entrepreneur generator”.

“After I met the guys there I found that there are plenty of different forums you can join. You just have to search a little deeper,” Sejrbo-Petersen says. “I realized that the scene for young entrepreneurs in Skåne is plentiful.”

“So my big tip for the first time entrepreneur in Skåne is to go to the city business office, called Närlingslivskontoret, and ask if they have any organizations or meeting places for entrepreneurs. This will shorten your search for like-minded people significantly. And once you get in touch with them, attend as many events as possible. It will make a big difference.”

Thinking about moving to Skåne for work? You’ll find all the info you need at Moving to Southern Sweden.

Produced by The Local and presented by Business Region Skåne. Read about more business opportunities in Skåne.