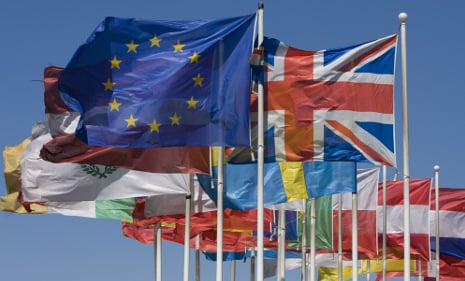 Can you spot Sweden's flag? Photo: TT
Swedes voted on membership of the European Union in 1994, following a tightly fought campaign between those in favour of signing up and those who argued that Sweden should stay out of the bloc.
In the end, just over 52 percent supported the idea, while 47 percent voted against EU membership.
According to a new opinion poll carried out by Sifo for Swedish broadcaster SVT, 57 percent of people believe it was the right decision, while 23 percent think Sweden should not have joined the union.
Perhaps most significantly, 20 percent of those questioned said they could not answer whether EU membership was a good or bad idea.
Sweden joined the EU in the year following the referendum, with Finland and Austria also signing up in 1995.
But Swedes later rejected the idea of joining the single European currency. After the Euro was introduced in 12 out of 15 EU countries, Swedes rejected the idea by a clear majority in a vote in 2003.
Speaking on the anniversary of the membership referendum, Liberal party member and writer on European affairs, Birgitta Ohlsson said:
"I would vote yes over and over again if I had the chance. The EU is a peace project, and has also been important to our economic growth," she told SVT.
But critics used the date to voice their concerns that the EU has taken too much power away from national governments.
"Our argument came true, there is a lack of democracy, the EU is 'top-down' and is about to become a United States of Europe," said Left Party leader Jonas Sjöstedt, who insisted he would vote against membership if there was another public vote today.