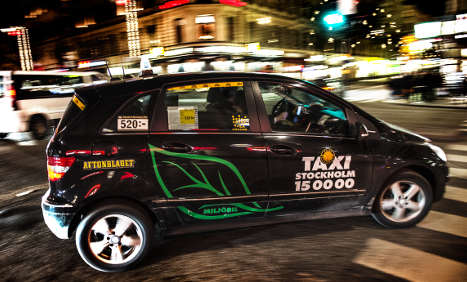 A Taxi Stockholm car. Photo: TT
According to Taxi Stockholm, one in four Swedes dislike plane travel and the company says it is targeting this group for its Christmas competition as well as international professionals living in Sweden who might want a more "adventurous" journey home.
"Right now, there’s an opportunity to travel anywhere in the world in a taxi – without the meter running," marketing director Carina Herly told The Local.
The trip will begin in Stockholm on December 1st and end on December 14th. Entrants must submit a written proposal to the company, explaining why they want to make a particular journey.
This is not the first time Taxi Stockholm has driven travellers to far-off places, but it is usually when other modes of transport have been knocked out of play. A prime example was during the ash cloud from the Icelandic volcano Eyjafjallajökull in 2010.
“Not many people know that we do longer journeys, but we’ve actually got fixed prices for some destinations in Europe. I wouldn’t rule out the idea that we could be an alternative to flying for more customers in the future, taking them further away than just the Stockholm city limits,” said Herly.
Taxi Stockholm hit the headlines earlier this month when it started offering customers the chance to take a ride with a therapist.
Both initiatives come as the company faces growing rivalry from cheaper cab firms including Uber.
"This market has been pretty quiet in innovation during a long period of time," said Herly.
She said that the company wanted to offer an alternative to the ongoing "price war" in Sweden's capital by running "added value" initiatives.
“Who knows, if the threatened closure of Bromma Airport happens, taxi charters could be the next big thing”.